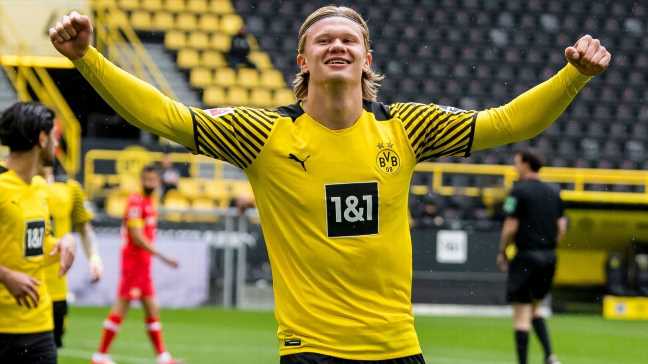 Due to Norway’s failure to qualify, Erling Haaland hasn’t kicked a ball at Euro 2020. Instead, the Borussia Dortmund forward has spent the majority of his time posting holiday pictures from the Greek Islands, all while he’s arguably seen his already stellar reputation enhanced.

With the knockout phase due to start at the weekend, we are still waiting for a striker to emerge as a cheaper alternative to the €180m-rated Haaland, still just 20 years old, for those clubs looking to sign a reliable centre-forward this summer.

There are plenty of clubs in the market for a striker in 2021. Manchester City want a replacement for Sergio Aguero, who has moved to Barcelona on a free transfer, while Tottenham must make plans for life without Harry Kane, if the England captain is granted the transfer he desires. Chelsea are also searching for an upgrade on their attacking options — both Olivier Giroud and Tammy Abraham could be seeking new clubs — while Manchester United may have only delayed their pursuit of a new striker by 12 months by handing the 34-year-old Edinson Cavani a new one-year contract at the end of last season.

The only top clubs that don’t really need a goal scorer right now are the likes of Real Madrid, Juventus, Bayern Munich and Liverpool, who already have Karim Benzema, Cristiano Ronaldo, Robert Lewandowski and Mohamed Salah respectively. But they will soon: Benzema is 33, Ronaldo is 36 and Lewandowski is 32, while Salah is 29.

If you take a look at the race for the Euro 2020 Golden Boot towards the end of the group stage, it’s no surprise to see Portugal’s Ronaldo (3) joint top, alongside Czech Republic’s Patrik Schick, Dutch midfielder Georginio Wijnaldum and 28-year-old Romelu Lukaku. Close behind is Italy’s 31-year-old Ciro Immobile, who is among six players on two goals.

At 25, Bayer Leverkusen forward Schick is approaching the prime years of his career, with Ukraine’s Roman Yaremchuk (2) the same age and doing a good job of boosting his prospects of move from Belgian club Gent this summer. But both Schick and Yaremchuk have been performing in Europe long enough for the top clubs to assess their potential to have an impact at the highest level and neither has yet earned a move to an elite team.

One scout from a leading Premier League club told ESPN that, within the game, there is a concern that the pool of top-class centre-forwards is shrinking dramatically. Euro 2020 (and the Copa America) has done little to dispel that perception, which is why every top club wants to sign Haaland if, or when, Dortmund are ready to let him go.

The dream scenario for every club is to sign a player like Aguero, who gave City 10 years of incredibly consistent service (with 260 goals in 390 games) after arriving from Atletico Madrid in 2011, and Haaland is regarded as that striker. Kylian Mbappe is another, but the Paris Saint-Germain forward is not a centre-forward in the classic sense of an Aguero or Haaland, although his goals record for PSG (111 goals in 127 games) is impressive. And despite a contract that expires in 2022, he’s also rated above €150m.

At Euro 2020, the gulf between the top strikers and the rest is huge; the worry among club scouts is that the best players are too old to sign and the rest simply aren’t up to the required level.

The game has changed in recent years and perhaps centre-forwards now take longer to mature and hit their peak? Haaland aside, there are no young sensations such as Michael Owen or Wayne Rooney out there, but the names of the leading scorers so far suggests that there is a drought of top quality centre-forwards in Europe.

Ronaldo, Immobile, Lukaku and Lewandowski have all lived up to their reputations so far at Euro 2020; England’s Kane is perhaps the only big-name centre-forward to have a slow tournament to date, but he has time to rectify that.

Spain are clearly lacking an elite striker, as Alvaro Morata has shown — 29-year-old Gerard Moreno is the only other option — while Scotland may have already secured qualification from Group D if they possessed a striker with more capabilities than Lyndon Dykes, who spent last season in the Championship with Queens Park Rangers. It is a similar story for Russia in Group B, who continue to rely on the ponderous Artem Dzyuba.

There have been some surprises: Cardiff’s Kieffer Moore is proving crucial as a target man for Wales, while Bayer Leverkusen’s Joel Pohjanpalo has impressed with his work-rate and physicality for Finland. Real Sociedad’s Alexander Isak has also shown promise for Sweden through two games.

But it’s an inescapable fact that the pre-tournament concern over a shortage of emerging centre-forwards is proving to be a reality. It also means that Haaland’s value continues to rise while he enjoys some well-earned time off.