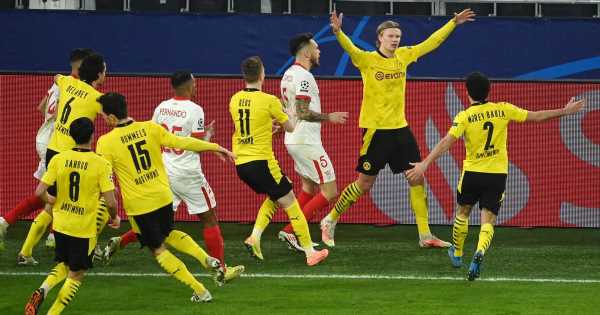 Borussia Dortmund ace Erling Haaland has sparked a bust-up in their Champions League clash with Sevilla by celebrating a goal in the face of opposition goalkeeper Yassine Bounou.

Haaland gave Dortmund the lead on the night, moving them 4-2 ahead on aggregate, before stepping up from the penalty spot eight minutes into the second half to all but seal their place in the quarter-finals.

And after tucking his spot-kick away, the in-demand Norwegian striker celebrated right in Bounou's face, which triggered chaotic scenes when the Sevilla goalkeeper’s team-mates reacted furiously and sparked a major scuffle.

The Spanish club have since pulled a goal back through Youssef En-Nesyri, but they still need another two to progress to the next round.

Despite the melee that followed, Haaland’s penalty was a historic moment for the youngster in the Champions League.

He is now the quickest player in the competition’s history to score 20 goals, achieving the feat in a mere 14 matches.

The Dortmund sensation has surpassed Harry Kane in remarkable fashion, with the Tottenham striker reaching that amount in 24 appearances.