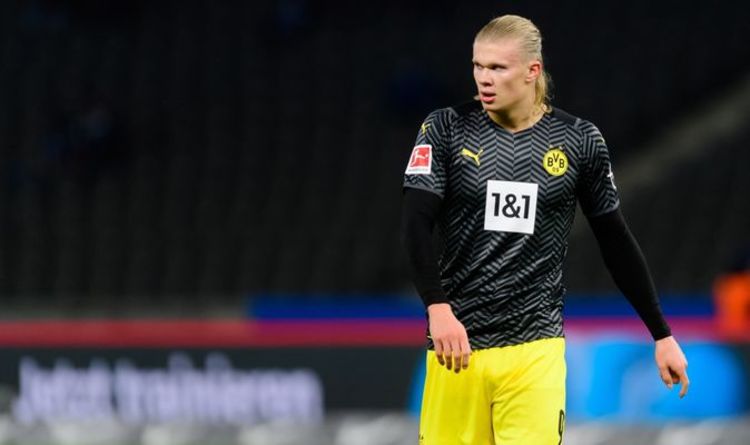 Borussia Dortmund talisman Erling Haaland’s reported £68million release clause becomes active in the summer, with many including Real Madrid and Manchester City vying for his signing. Yet if Haaland decides upon a move to Real Madrid, and with City in need of a striker following the departure of Sergio Aguero in July, they could make a move for Dusan Vlahovic or Alexander Isak, which may impact Arsenal’s planning.

With 19 goals in just 15 games so far this season, he has developed into one of the greatest goalscorers on the continent, something he threatened to do even in his Salzburg days.

And his superb technical ability has drawn attention from Europe’s top sides, with Real Madrid, City, Man United, Barcelona and Bayern Munich all registering an interest in the Norwegian.

His £68m release clause is a considerable bargain in the current market, given his his age and the goals and professionalism he has shown so far in his short yet successful career.

But if the youngster decides on Real Madrid as the Daily Star say he will, City boss Pep Guardiola will be forced to look elsewhere for the striker that would complete his team.

And the Athletic report that he has an interest in Isak and Vlahovic. A move for either would impact Arsenal’s transfer plans, however.

The Gunners are in desperate need of a striker given that Alexandre Lacazette and Eddie Nketiah’s contracts expire in the summer.

His five years at the club have been relatively successful in terms of individual exploits with 53 league goals in just 143 Premier League games.

And with Nketiah’s contract also expiring after the youngster made his desire to leave for first-team football clear, the Gunners must start preparing for the future.

Their case isn’t helped by Pierre-Emerick Aubameyang’s decline, with the Gabon international reportedly free to find another club after being stripped of the captaincy in December given his multiple disciplinary issues.

Fiorentina are said to be looking for a fee of £70m for Serbian wonderkid Vlahovic, whilst Isak would likely be available for a similar fee from Spanish outfit Real Sociedad.

And Arsenal boss Mikel Arteta has refused to rule out a move for reinforcements in the January window.

“We have a really special situation in that position [striker] because obviously you are talking about three players with different issues at the moment,” Arteta said.

“But we have to live with that and so far the players that are here are fully committed.

Yet if they cannot sign either this month, and City miss out on Haaland at the end of the season, they face a battle with the Citizens to land Vlahovic or Isak in the summer.

Even worse, given the widespread interest in Vlahovic, there’s every chance he goes to neither City or Arsenal and the two Premier League clubs are left to duel it out for Isak.