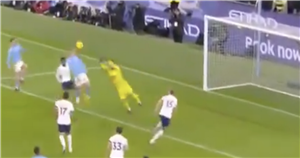 Baffled football fans have been left wondering what's happened to Erling Haaland after the Manchester City forward missed a sitter against Tottenham Hotspur.

Haaland, 22, has been a revelation for the Premier League champions after switching Signal Iduna Park for the bright lights of Manchester, rattling in a staggering 21 goals in 17 matches. However, the Norwegian powerhouse is currently enduring the longest goal drought of his Man City career having not bagged since a 1-1 draw at home to Everton on December 31.

And the former Borussia Dortmund striker passed up a glorious opportunity to notch his first goal of 2023 during the first half of City's Premier League clash with Tottenham Hotspur.

Out-jumping Hugo Lloris to get on the end of Riyad Mahrez's wicked delivery, Haaland somehow managed to make too much contact with the ball, sending a header high over the crossbar. The poor effort led to fans questioning if his goalscoring talents are in fact mercurial.

"Nah how did haaland miss that," asked one supporter. "Has haaland lost his magic not like him to miss chances," jibbed a second.

HAVE YOUR SAY! How bad is Haaland's sitter? Let us know in the comments section.

"Erling Haaland they bought you so they could make the league titles easier. You miss 2 big chances and are 2-0 down at home to Tottenham. Have some shame," slammed a third. "Haaland if you’re gonna be a non-factor in possession can you not miss sitters," blasted a fourth.

While a fifth joked: "Haaland fully integrating himself into the City side now. Need to miss a few good chances to be a true blue."

"It’s interesting with Pep Guardiola’s team," said Neville. "We’ve seen them for four or five years being the style unchanged, absolutely consistent in everything that they do, and they’re not even in transition with Haaland up front but they’re definitely fighting it a little bit, the two styles.

"They’re needing to play forward a little more direct and still trying to play the football they’re so used to. They’re a little bit in between."