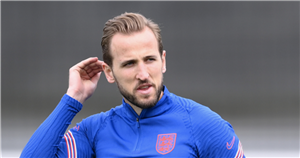 Harry Kane's England team-mates believe that he 'could refuse' to return to Tottenham training ahead of the new Premier League season following interest from Manchester City.

The Three Lions skipper, who scored four goals at Euro 2020 as Italy won the final on penalties, has been open about his quest to win major honours as he approaches his 28th birthday.

Having won the Golden Boot and Playmaker of the Season award last time out, Kane is ready to force through a move despite having three years left on his Spurs deal.

In a fresh update on his desire to leave north London, it has been reported that Kane might be willing to anger Daniel Levy by refusing to attend training under Nuno Espirito Santo.

The Telegraph report that Kane’s England team-mates 'believe he could refuse to return to pre-season training' in a bid to force through a move to the Etihad.

Despite new boss Santo insisting that the club have no intention of letting their star player leave this summer, the stance of Levy could force Kane to take action.

Kane is currently resting with his family following an intense month playing for England at Euro 2020, which ended in heartbreak despite his successful penalty in the shoot-out at Wembley.

Will Harry Kane leave Tottenham this summer? Give us your thoughts in the comments section

Santo said earlier this week: “Harry is our player – period. No need to talk about anything else. Now is the moment for Harry to recover his energy [after Euro 2020].

“When he comes back [to training], we will have time to speak. But now is the moment for Harry to rest and prepare for what is coming – I’m looking forward to him joining the group and for us to start working together. The best is to work with the best players around, and Harry is one of those.

“I have no doubts in my mind. When Harry Kane arrives he will feel that everyone of us has to commit himself to becoming better. We are ambitious people. We want to do it well. And we count on Harry for that."

Kane had told Gary Neville in May: "I think that’s definitely a conversation to be had with the club. I want to play in the biggest games, the biggest moments.

"For sure, there’s a moment in my career where I have to reflect and see where I’m at and have a good honest conversation with the chairman and I hope we can have that conversation.

"I’m sure he’ll want to set out the plan of where he sees it but ultimately it’s going to be down to me and how I feel and what’s going to be best for me and in my career at this moment in time."