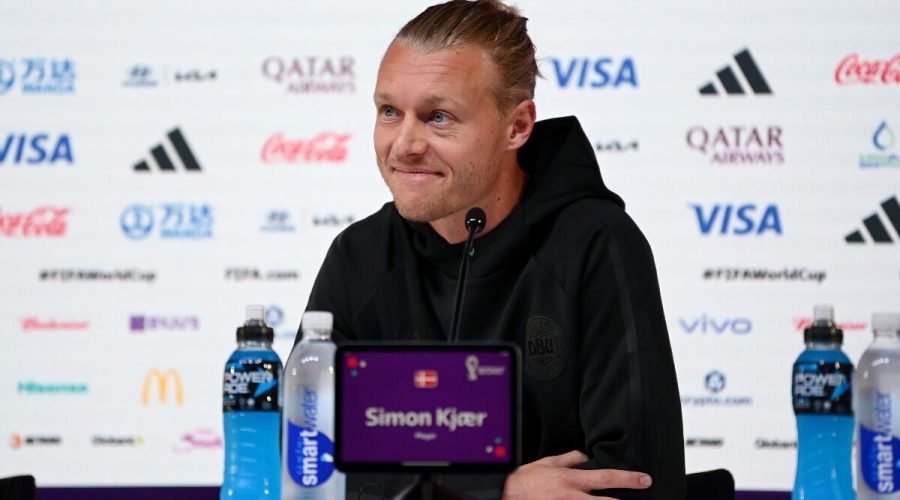 Southgate confirms England to take the knee at World Cup

Denmark captain Simon Kjaer has insisted he is “fine” with risking receiving a yellow card for wearing the OneLove armband at the World Cup as England’s row with FIFA rumbles on. The FA could back down in their fight against the world football governing body after being warned they could be handed sporting sanctions if Harry Kane sports the armband against Iran on Monday.

The Football Association may be forced to back down in their ongoing row with FIFA over the OneLove armband, having revealed their intention to wear it back in September. The FA’s CEO Mark Bullingham admitted they may have to explore alternative ways to mark their support for inclusivity if FIFA follow through on sporting sanctions.

But while the Three Lions are considering a climbdown, Denmark captain Kjaer has boldly suggested he would happily take a caution in a World Cup game for wearing the armband.

When discussing the issue on Monday in a press conference, he told reporters: “I’m fine by that,” referring to picking up a booking if it means wearing the captain’s armband as planned.

The FA were ready to accept a fine if Kane wore the armband, but the prospect of England’s captain receiving a booking for doing so against Iran has forced senior officials to consider backing down. Kane would face the prospect of missing the final group match against Wales if he was to be booked in their first two matches.

FA chief executive Bullingham admitted that England would have to find ‘another way to show our values’ if FIFA’s threats of sporting sanctions are real.

“It is a very live situation, and there are discussions that are carrying on. We are working through those issues right now,” he said, speaking to BBC Radio 4 on Monday.

“It is true that FIFA did say that there could be sporting sanctions, and that’s obviously something that we’ve got to work through. We’ve been clear that we want to wear the armband, it’s important to us, but equally, we need to work towards the discussions right and see where we end up.

Kane has taken a similar stance to Kjaer, insisting he would be happy to wear the armband on Sunday. And it remains possible that Denmark follow the same path as England in refusing to take the risk.

The OneLove armband was designed to show solidarity with the LGBTQ+ community, with same-sex relationships illegal in Qatar and punishments including jail time.

Wales, Germany, the Netherlands, France, Belgium, Denmark and Switzerland were also expected to show their support for marginalised communities while competing in a Gulf state.

However, FIFA’s threats of punishment via ‘sporting sanctions’ have seemingly sparked a last-ditch change of heart, with the Netherlands have become the first nation to officially drop out of contention. And there are now fears their decision to go back on their word could encourage other nations to take a similar stance.

November 21, 2022 Soccer Comments Off on England in awkward spot over armband row as Denmark’s Kjaer speaks out
NFL News