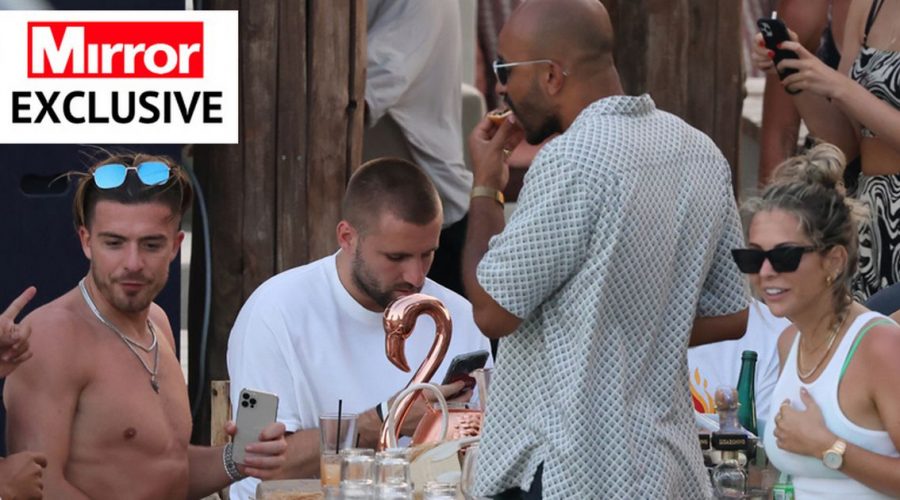 England heroes Jack Grealish and Luke Shaw soaked up the rays as they continued their post Euro 2020 booze bash in Mykonos.

The lads, who were joined by Lions’ Den host and former Love Islander Josh Denzel, spent the day at the swanky SantAnna beach club on the Greek party island.

Topless Grealish, a hugely popular member of the squad, and finals goal hero Shaw were surrounded by empty bottles as the boys made the most of their time off.

Grealish, 25, sat and chatted to childhood sweetheart Sasha Attwood, also 25, at the bash.

The pair separated after enduring a "rocky patch" in their relationship but rekindled in time for the European championships.

And it seems like they’ll be sticking together after Aston Villa ace Jack whisked her off to Mykonos.

Man United’s Shaw, 26, chatted and laughed for chunks of the afternoon with Denzel, 30, and was pictured beaming as he boogied with his arms in the air.

The loved-up couple posed for pictures together with pals.

Sign up for our daily newsletter to keep up to date with all the essential information at www.mirror.co.uk/email .

Meanwhile raucous female members of the group danced on tables and were told by their private security to get down.

The group laughed and danced all day in the baking heat, with Grealish looking more red than brown as the day wore on.

The stars headed to Mykonos – a popular spot for footballers – after their Euro 2020 final loss to Italy.

Both Grealish and Shaw impressed throughout the tournament, which ended with the Three Lions' heartbreaking penalty shoot-out defeat at Wembley.

Left-back Shaw was named as a particular stand-out performer for England – although failed to make it into the official UEFA team of the tournament.

Greece is currently on the amber travel list, meaning the heroes will have to quarantine upon their return home – unless they are fully vaccinated.