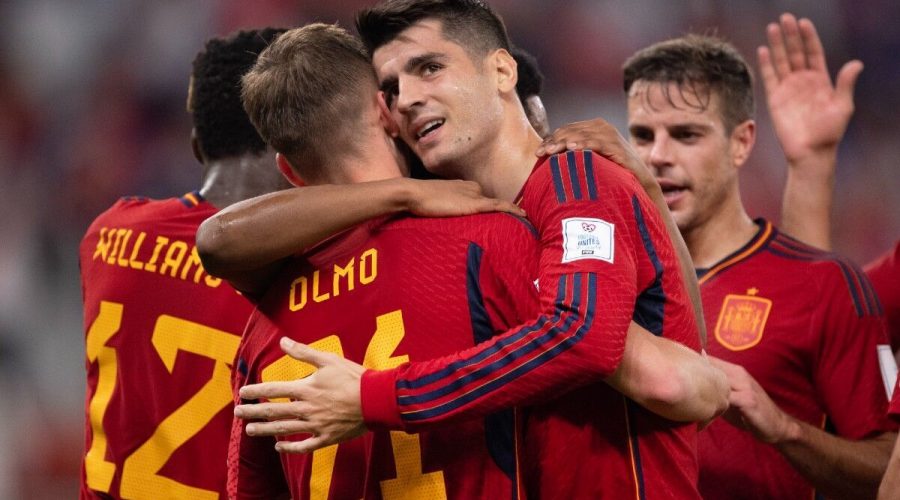 It’s been a pretty good World Cup for England so far. They beat Iran 6-2, Argentina lost to Saudi Arabia and Germany slumped to a shock defeat to Japan. But Spain’s brutal demolition job of Costa Rica is a warning to the Three Lions that, even as their rivals toil, strong teams remain there to challenge them for global supremacy…

Spain had gone into their match with Costa Rica as favourites but, despite that, nobody expected the ruthless display that took place at the Al Thumama Stadium.

They were 3-0 up and coasting before half time, with Dani Olmo, Marco Asensio and Ferran Torres all on target.

And, after Torres bagged his second goal on the game after the interval, the rout continued with Gavi, Carlos Soler and Alvaro Morata all netting.

Spain, at the last World Cup, were a team in crisis.

They sacked Julen Lopetegui on the eve of the tournament, sending shockwaves around the world, with Fernando Hierro then drafted in as a last-minute and temporary replacement.

They battled their way out of the group stages but fell to Russia in the round of 16, losing on penalties on a dramatic night that sent Moscow wild.

However, in Qatar, Spain look like they mean business.

Their finishing, for example, was impressive. From their eight shots on target, seven went in. Spare a thought for Keylor Navas, who looked shell-shocked between the sticks at what will likely be his last World Cup.

Spain’s passing was equally so. They managed a huge 1043 throughout the showdown, with an accuracy of 93 per cent.

To put that into perspective, Costa Rica could only manage 231. Their own accuracy was 71 per cent, numbers not good enough to get you anywhere at a World Cup.

Spain dominated the ball with 82 per cent, three per cent more than what England managed in their opening-day victory over Iran on Monday.

And, out of all the teams to take to the field at the tournament so far, they certainly seem the most impressive.

England will, of course, not fear anyone.

The Three Lions have the players capable of taking the golden trophy back home, with Bukayo Saka and Jude Bellingham already emerging as talismen of this tournament.

Even substitutes such as Jack Grealish and Marcus Rashford, who both came off the bench, sparkled during their opener against Iran.

But Spain look like a genuine threat and will fancy their chances of winning the competition for the second time in just over a decade.

Another thing England will have to contend with at this tournament, according to Gareth Southgate, is VAR.

The Three Lions were denied a penalty in their win over Iran when it was clear Harry Maguire was fouled in the box. Similar decisions have since been given, but not for the Three Lions on that occasion.

And Southgate, speaking earlier in the week, admitted he was worried about the decision-making at the tournament.

“What worries me is we were used in an example in the referee’s video,” he said.

“And what we were shown, the Harry Maguire incident in the first half, we were told that would be a definite penalty.

“In the second half, maybe there’s a shirt pull, we’ve got to be better on that.

“But I’m a bit worried we were the example shown, and then to get a decision as happened in the first half, we need some clarification really as to how it’s going to be.

“We’ve got to have that dialogue with FIFA and just make sure…we want clarity, otherwise, we don’t know where we stand.”

November 23, 2022 Soccer Comments Off on England have been sent a brutal warning by Spain after emphatic win
NFL News