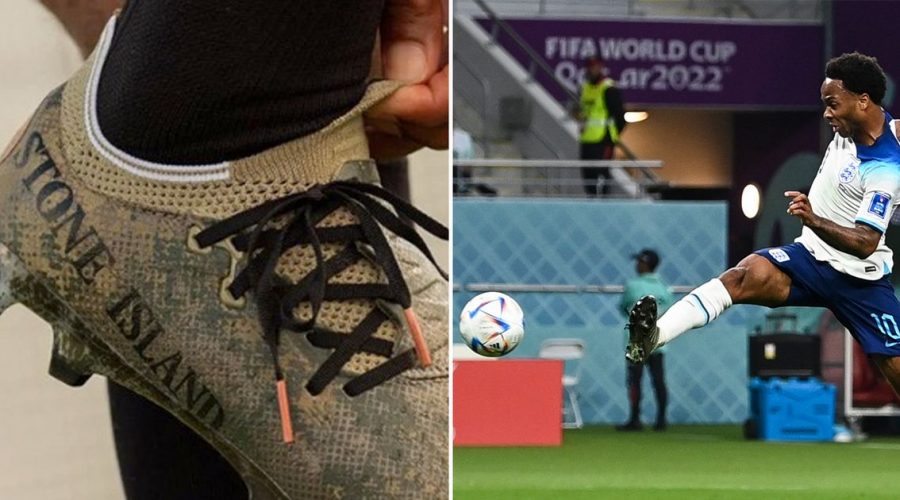 England fans have joked Raheem Sterling scored with the outside of his boot to "get the badge in" against Iran.

Sterling netted the Three Lions' third in their 6-2 win on Monday (November 21) afternoon with a well-taken first-time finish from Harry Kane's cross. He did so in his Stone Island boots, which he and team-mate Bukayo Saka are wearing throughout the World Cup.

The designer brand is popular amongst the football community, with the ever-growing "get the badge in" movement seeing those wearing their clothing purposefully posing for pictures with it in shot.

So Sterling's finish, which coincidentally showed off the Stone Island logo, had fans all making the same joke. One tweeted: "Sterling hitting that with the outside of his boot so he can get the badge in."

Another wrote: "Sterling just knocked that in off the Stone Island badge. Cold." A third commented: "That is a serious 'get the badge in' from Sterling there. Magnificent."

Should Sterling start against the USA? Let us know in the comments section. "Raheem Sterling gets the badge in to make it three for England," posted a fourth. And a fifth said: "That Sterling goal was millimetres from going in off the #badge. What a moment for the #culture."

The Stoney boots are part of a football range which they've launched today off the back of their growing popularity with footy fans. Sterling and Saka gave them the perfect advertisement against Iran, with the latter bagging himself two goals in the match.

Having both got on the scoresheet, they're expected to start again when England take on the USA on Friday (November 25) in their second group game.

November 21, 2022 Soccer Comments Off on England fans think Sterling scored with outside of boot to get the badge in
NFL News