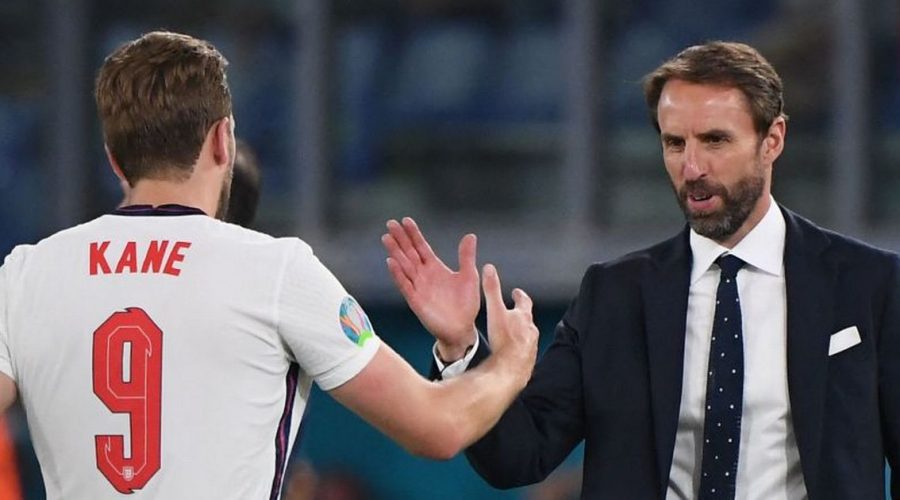 The manager has been spotted wearing the same knitted navy blue polka dot neck-string on the touchline as he plotted the Three Lions' path to Wednesday's semi-final against Denmark.

It made its first appearance during England's opening 1-0 victory over Croatia.

Southgate, 50, then benched it for the Three Lions' drab goalless draw against Scotland – the only game they have failed to win or score in.

He recalled the appendage for the 1-0 win over the Czech Republic which ensured England finished top of their group.

It was selected again for the historic last-16 win over Germany.

And he was proudly sporting it once more during Saturday's 4-0 quarter-final drubbing of Ukraine.

They claimed it was no coincidence the team's only hiccup in the tournament against Scotland was a tie-free affair.

For that match Southgate ditched a suit altogether and chose chose to wear a trendy 'shacket' instead.

He ditched the trendy shirt-jacket combo afterwards and returned to his trusty tie.

Will England win Euro 2020? Let us know your thoughts in the comments section

Since then England have not stopped scoring and stand on the brink of a first major tournament final in 55 years.

Supporters have launched a campaign to compel him to wear his tie for both the semi and Sunday's final.

Some hailed it `the new waistcoat' after the smart fashion item that helped inspire England's journey to the 2018 World Cup semi-finals.

Another said: "Can we all just stop pretending Southgate knows what he’s doing and admit it’s down to his lucky tie (which he didn’t wear v Scotland)."

One supporter pointed out Match Of The Day host Gary Lineker had spotted the significance of the tie.

"@GaryLineker noticed Gareth Southgate has his lucky tie on again, not worn during the Scotland game," he said.

Another wrote: "Dear FA. Do not let Mr Southgate take off that tie. Signed, England."

"Southgate's tie's a winner – just like his team," added another.

Though it was unclear where Southgate got the cravate a string of designer outlets and High Street stores have similar versions including Bronci & Bo, Huntsman Savile Row, J. Crew, John Henric and OTTA.

The Huntsman Savile Row, which looks similar to the one worn by the England manager, retails at £140.

But the manager announced ahead of the current tournament he was putting the item back in his wardrobe.

He told BBC Radio 4's Today programme: "It was a lovely moment to have that connection with the public.

"I haven't worn a waistcoat on its own since.

"I don't think I'll be wearing a waistcoat this summer."

He said he had not been superstitious since he was sacked by Middlesbrough while wearing a pair of supposedly `lucky' socks.