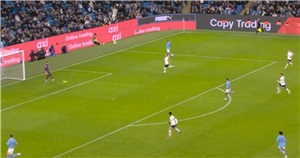 The Etihad Stadium was stunned into silence as Tottenham put Manchester City to the sword by scoring two goals in three minutes right on half time.

Ederson didn't cover himself in glory on either occasion. First, he played a foolish pass into Rodri's feet with Spurs' Rodrigo Bentancur bearing down on him, causing the Spaniard to panic and blindly tap the ball sideways, straight into the path of Dejan Kulusevski, who duly slotted home.

Minutes later, Ederson parried Harry Kane's close-range shot into the path of Emerson Royal, who headed over the scrambling Brazilian into an empty net.

During the half time break, Jamie Carragher criticised Ederson for trying to point the finger at Rodri for the opening goal.

"What I don’t like is that he tries to blame Rodri," the ex-Liverpool man said. "It’s not Rodri’s fault. Manchester City we know like to build from the back, but Rodri needs this on his left foot – not on his right foot.

"The mistake is Ederson’s. That’s the big mistake but credit to Kulusevski."

Was Ederson at fault for both goals? Let us know what you think in the comments section below.

On commentary, Gary Neville argued that mistakes are to be expected with the way City like to play out from the back.

"I could say it’s madness from Ederson but he’s been doing it consistently for five years playing those passes into Rodri, and you are going to get the odd one wrong.

"This one he does get wrong – Rodri, who is brilliant in that position, is just under too much pressure from Bentancur, well done to him."

City came flying out the blocks in the second half and managed to turn the game around as instantly as Tottenham had sucker-punched them in the first 45. They pulled a goal back through Julian Alvarez six minutes after the restart, and Erling Haaland broke his goal drought to equalise two minutes later.