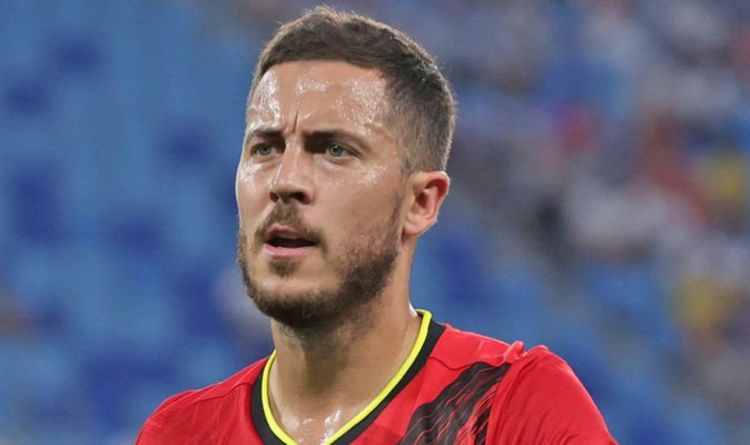 Chelsea are being linked with a sensational deal for Real Madrid star Eden Hazard. The Belgium international only moved to La Liga in the summer transfer window of 2019 after a glittering spell in west London. However, he may now be primed for a blockbuster return to Stamford Bridge.

Chelsea offloaded Hazard because he wanted to join Real Madrid.

However, since touching down in Spain, the Belgium international has become a shadow of his usual self.

Hazard has toiled at Real Madrid, failing to do Cristiano Ronaldo’s old No 7 shirt justice and struggling to make an impact.

Most fans want him to go, convinced Real should cash in and use the money on signing Paris Saint-Germain hitman Kylian Mbappe instead.

And, at present, Chelsea are in the mix to secure his signature.

Reports have suggested a deal that would take Hazard back to the club is being worked on, with Real ready to accept a fee close to £50million to let him jump ship.

So, with that being the case, it’s time to throw things back to when Chelsea first signed the 30-year-old back in the summer transfer window of 2012.

They’d seen him sparkle at Lille, scoring 22 goals from 49 appearances as the club finished third in the Ligue 1 table.

But, in the end, Chelsea won the race instead.

Hazard insisted he’d announce his decision on Twitter. And then came the bombshell that he was ‘signing for the Champions League winner’.

Of course, that didn’t mean United. They’d been knocked out of the competition to Real Madrid, going down 3-2 on aggregate with Cristiano Ronaldo scoring the decisive goal.

Instead, he meant Chelsea – who had won the competition despite the odds being stacked against them.

The Blues had started that year in a mess, with Andre Villas-Boas losing his job and Roberto Di Matteo brought in on an interim basis.

A 3-1 defeat to Napoli at the Stadio San Paulo had Chelsea facing elimination in the round of 16, with few giving them a chance of turning the tie around.

But then came the revival.

Chelsea beat Napoli 4-1 in the return leg before going on to beat Benfica and Barcelona in the quarter-finals and semi-finals respectively.

And they then beat Bayern Munich in the final, winning on penalties after Didier Drogba’s bullet header had cancelled out a Thomas Muller strike.

And signing Hazard was the cherry on top of the cake, especially given the fierce competition for his signature.

Speaking last year, the Belgian opened up on his decision to join Chelsea – citing the experience of living in London as a factor.

“I knew I would easily adapt. London, close to home, not too far from Lille,” he said.

“[Kevin] De Bruyne had played there, Romelu [Lukaku] was around. There were enough French speakers. I knew I would play enough.”

While Chelsea want to bring Hazard back, however, the player insisted in June that he’d stay at Real Madrid.

“I still have a three-year contract with Real Madrid, so going back to England is out of the question,” he said.

“Everyone knows that my first two years were not good, so first I want to prove myself at Real Madrid. I will do everything to do that.

“I certainly don’t see myself leaving Madrid, given the contract situation.

“I know myself and I know when I’m in shape. If that’s the case, I can give it my all for Real next season. That’s my plan.”