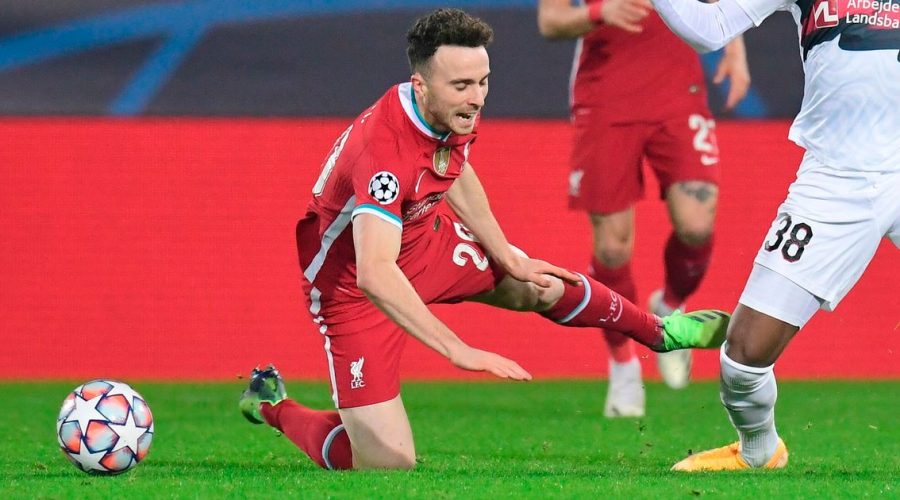 Liverpool are still not planning to dip into the January transfer market, despite their injury woes.

Diogo Jota joined the likes of Virgil van Dijk and Joe Gomez on the sidelines during December.

All three have knee problems, as the summer arrival from Wolves suffered ligament damage.

The Portuguese star, who’s start to life at Anfield has gone better than he could have ever expected, sustained the blow during Liverpool’s final Champions League group game.

He has not featured in the team since the Reds’ 1-1 draw away to Midtjylland on December 12. Jota was ruled out for up to eight weeks at the time, although the latest is that he may return by the end of January.

Liverpool will rely on their front three of Mohamed Salah, Roberto Firmino and Sadio Mane in the meantime, and they are content to carry on with their current options until at least the summer.

The Liverpool Echo say notable incomings are unlikely this month.

The title race is tight this term, with the reigning champions facing pressure from Merseyside neighbours Everton and arch-rivals Manchester United. Pep Guardiola’s Manchester City are not far behind either, while Leicester are flying too under ex-Reds manager Brendan Rodgers.

Even though Liverpool can’t afford any more injuries, they are not plotting to make any significant recruitment before the summer.

Joel Matip faces a few weeks out with a muscle issue, adding to Liverpool’s defensive worries. But Jurgen Klopp does have Xherdan Shaqiri available as a back-up in attack, with the Swiss set to stick around this month.

After Thursday’s 0-0 draw at Newcastle, Klopp said: "Shaq is back too, and that’s the best news tonight.

“The boys are back [Thiago and James Milner too] and as far as I know at the moment, nobody got injured tonight, which is a very important thing."

Leaders Liverpool are next in action on Monday away to Southampton at St Mary’s (8pm).