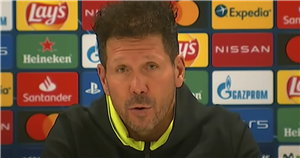 Atletico Madrid boss Diego Simeone has surprisingly claimed any Chelsea player could get in any team in Europe – whilst also singling out their goalkeepers and strikers for praise.

Simeone’s men are set to take on the Blues in the first leg of their last-16 Champions League tie on Tuesday night, which is being played out in Romania due to Covid-19 travel restrictions.

Atletico, who currently sit top of La Liga, will head into the match as favourites, as Chelsea are currently outside the Premier League top four amid a topsy-turvy campaign which has seen them replace Frank Lampard with Thomas Tuchel as their head coach.

However, the Spanish club have conceded at least one goal in their last seven matches, the worst run of Simeone’s 10 years at the club, whilst also suffering their first home defeat of the season against Levante at the weekend.

Chelsea, meanwhile, are yet to lose under Tuchel since he replaced Lampard in the Stamford Bridge hot-seat at the end of January.

Simeone certainly rates the west London outfit highly, even waxing lyrical about their goalkeepers and strikers – despite the likes of Kepa Arrizabalaga and Timo Werner struggling for form this season.

“It's a strong club, financially. Since last year, they have spent enormously,” said the 50-year-old.

“The coach is important and he has made a strong impression. It's a young and good squad and they invest in young players.

“They changed the coach when they didn't see the investments were improving (the squad). Tuchel has a strong team and they have improved statistically.

“Just look at the goalkeepers, the strikers … any player could play in any team in Europe.”

Simeone’s comments come as a surprise given Kepa’s poor form in goal for Chelsea over the past 18 months, while new recruit Edouard Mendy has also made a few costly errors since joining from Rennes back in September.

And upfront, current strikers Tammy Abraham, Timo Werner and Olivier Giroud have only scored 15 Premier League goals between them.

Werner, who joined in a £54million switch from RB Leipzig back in the summer, ended a three-month-long goal drought in the league by scoring against Newcastle last week.