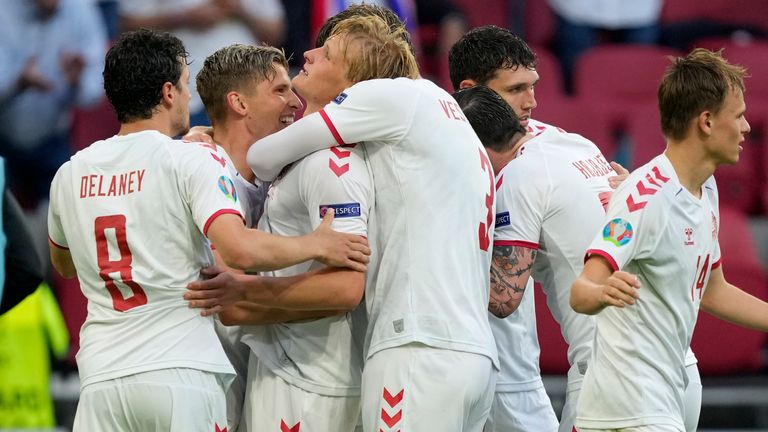 Denmark’s tournament will always be remembered for its traumatic opening and Christian Eriksen will never be far from the thoughts of anyone watching Euro 2020. But three weeks on, his team-mates are burdened with glorious purpose and eyeing a movie-script ending.

“The love and compassion from the whole Danish population has given this team wings,” says coach Kasper Hjulmand. “We are playing with the heart of Christian, the heart of the whole population. With that support, we strongly believe in ourselves.”

That belief was tested early in the tournament. Defeat to Finland was understandable, coming as it did in circumstances that the players surely should not have been expected to perform. The loss to Belgium was hardly a shock given the quality of the opponents.

But it left Denmark on the brink of elimination. The 4-1 over Russia in Copenhagen in their final group game proved cathartic for a nation and sparked a momentum shift that has taken the team all the way to a Wembley semi-final with England this Wednesday.

Their efforts since then suggest these players have the ability to ride this wave of emotion. The 4-0 win over Wales was emphatic, the 2-1 quarter-final win over the Czech Republic not as close as the score suggests given they led for all but the first five minutes.

England will be the biggest test yet but Denmark have little to fear given Gareth Southgate’s side did not even score a goal against them in two Nations League meetings earlier this season. Hjulmand’s side even won at Wembley in October.

The loss of Eriksen, scorer of the winning penalty that evening, clearly robs Hjulmand of his most talented player. But the coach deserves huge credit for handling the tactics as well as the emotions in switching formation mid-tournament and making it work. 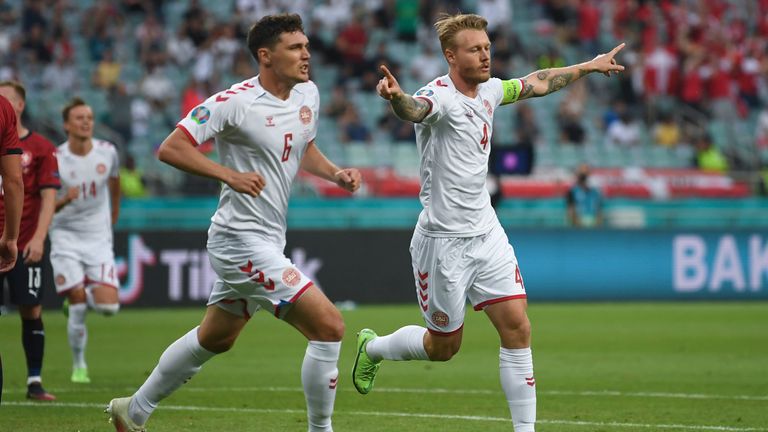 Denmark played with four at the back in both of those Nations League game against England but have added an extra defender in Eriksen’s absence, the introduction of Jan Vestergaard alongside Andreas Christensen and Simon Kjaer bringing some stability with a back three.

The trio are well protected. Nobody left in the tournament has committed more fouls than Thomas Delaney, while Pierre-Emile Hojbjerg offers diligent cover. Both have contributed in attack, Delaney with the opening goal against the Czechs and Hojbjerg with three assists.

The fact Denmark have retained that potency in attack – with 10 goals in their last three matches – despite an ostensibly defensive change is a testament to their forwards.

Martin Braithwaite and Mikkel Damsgaard are thriving just off the front man with the youngster’s off the ball running something for England to look out for in the channels. 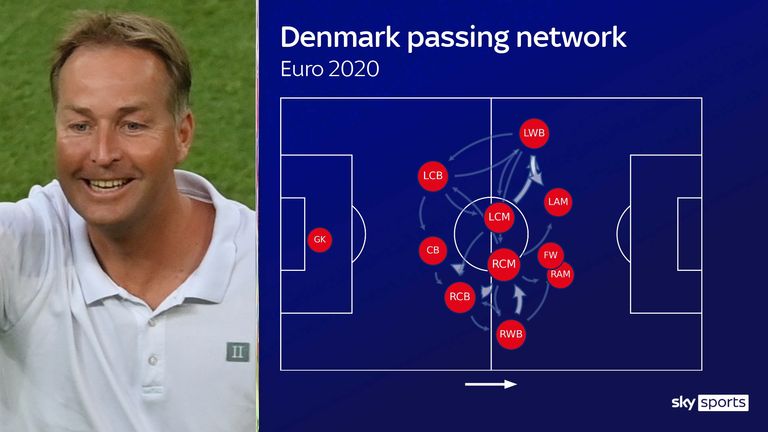 Out wide, Jens Stryger Larsen can be relied upon for good delivery from the right, while Joakim Maehle provided arguably the assist of the tournament against the Czech Republic. His cross from the left with the outside of his right boot was perfect for Kasper Dolberg.

A natural right-footer, perhaps that makes Maehle slightly less comfortable when going the other way and being forced to defend on the outside. Does that favour Jadon Sancho, a right-winger more willing to hold the width and pin back the Denmark wing-back?

That is likely to be in Southgate’s thoughts – just as the importance of set pieces will be. Taking advantage of them, as they did twice against Ukraine, will be difficult given the aerial dominance of the 6’6″ Southampton defender Vestergaard, a threat in both boxes. 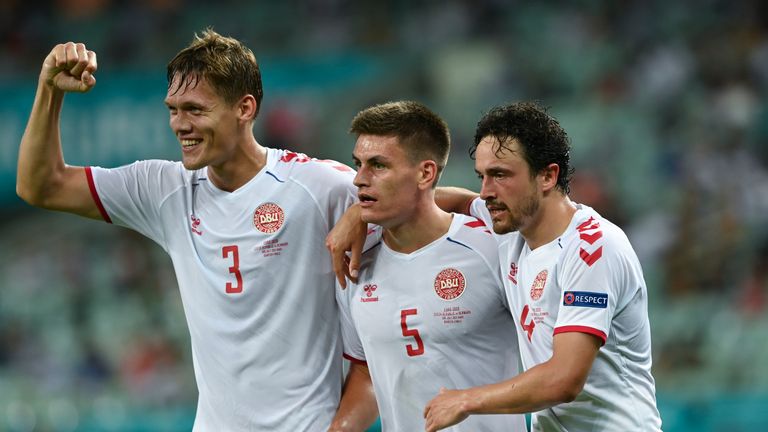 A more obvious area to exploit will be a lack of mobility in the Denmark defence. For all the fine work of Kjaer and his defensive colleagues at the back, there have been signs in this tournament Hjulmand’s side are increasingly vulnerable as the game progresses and space emerges.

Although they did score a flurry of late goals against Russia and Wales, Denmark have ‘lost’ the second half in their other three matches, fading against the Czechs. Indeed, all five of the goals that they have conceded so far have come in the second half of matches.

Given that England tend to keep it tight early before opening up – Southgate’s side have scored six of their seven goals at Euro 2020 after the interval – patience could be key.

It promises to be an emotional evening. The neutrals around the continent will be backing Denmark, but Hjulmand knows there will not be too many of them packed in at Wembley.

“Going to Wembley with 60,000 is motivation,” he says. “The motivation for us is to silence this crowd. We know it will be difficult. But we will fight, we will play well and we will leave everything out there on Wednesday. Then, we will see what happens.”

Will Gareth Southgate go to a back three? What threats do Denmark pose on England’s watertight defence? What can England learn from October’s Nations League defeat against the Danes? And has Raheem Sterling been the overall player of the tournament so far?

Plus, we preview the other semi-final as Italy face Spain on Tuesday night at Wembley.

July 6, 2021 Soccer Comments Off on Denmark scouting report: England to face inspired opponents but there are weaknesses that can be exploited
NFL News