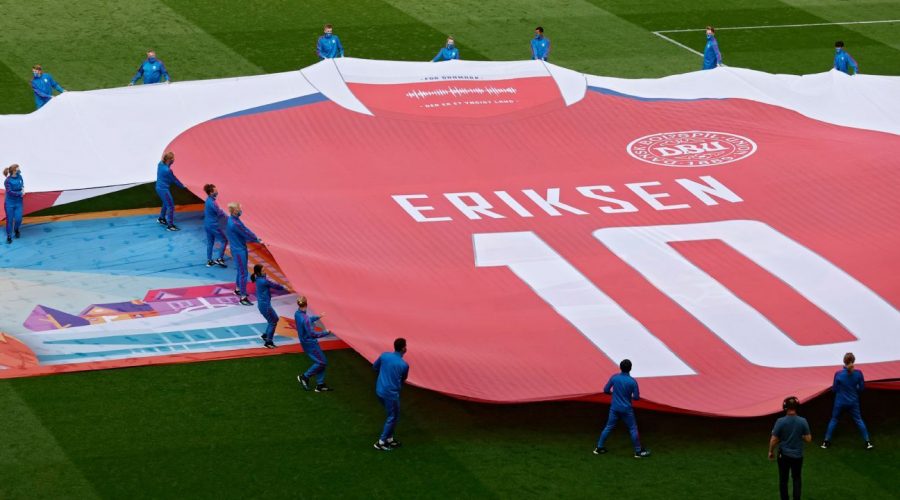 Denmark manager Kasper Hjulmand said Christian Eriksen was at the forefront of his mind as they beat Wales 4-0 in Amsterdam.

Eriksen, 29, suffered a cardiac arrest in the first half of Denmark’s opening match in Euro 2020 on June 12. He was discharged from hospital on June 18 after being fitted with an implantable heart monitoring device.

Eriksen is continuing his recovery at home but remains firmly in the Denmark players’ minds as they faced Wales in the round of 16 in Amsterdam. The match was played at Ajax’s ground, where Eriksen started his career in 2008 and played through to 2013 for the Dutch giants before moving to Tottenham Hotspur.

After the win at Johan Cruyff Arena, Hjulmand said: “Cruyff is one of my greatest inspirations and knowing this was one of Christian’s first home and knowing this is where he played one of his first games at 16 years old… he’s with us, and I would have loved for him to have been here.”

Hjulmand was delighted with Denmark’s performance, which saw Kasper Dolberg score twice, alongside goals from Joakim Mæhle and Martin Braithwaite. As he assessed their victory post-match, he said, “it’s hard to believe this is reality” and reflected on their journey as they now prepare for the quarterfinals.

“When Christian collapsed, that changed everything. We were put in a different situation — I am grateful for the support everyone has shown as that’s what we needed in that moment. We needed the love and support and that’s what gave us wings — I admire the boys, they’re warriors.”

Denmark were forced into two changes for the match with Yussuf Poulsen injured and Daniel Wass ill. Dolberg replaced Poulsen up front and scored twice to help Denmark home.

“I think we have a star striker in Kasper,” Hjulmand said. “I watched him when he was a kid and he had that season when he scored 16 goals for Ajax. He did have some problematic phases with injuries and the coronavirus but he bounced back.

“He didn’t get to play too much at the beginning, but I saw in the training sessions he was fit. We had this combination that worked on the pitch. He was charging, and I think it was meant to be to have this huge climax here. The first goal was amazing. It was an amazing performance from Kasper.”

Denmark will face the winner of Netherlands-Czech Republic in Baku on July 3, and despite their run of form, Hjulmand did not bite when asked if they were now contenders to win the championship.

“One thing at a time,” Hjulmand said. “Each game has its own course. We believe in the squad and our quality, and there’s no need to think that far ahead.

“I can’t promise end results, but I can promise we’re going to fight.”

July 3, 2021 Soccer Comments Off on Denmark boss: Recovering Eriksen ‘with us’ in win
NFL News