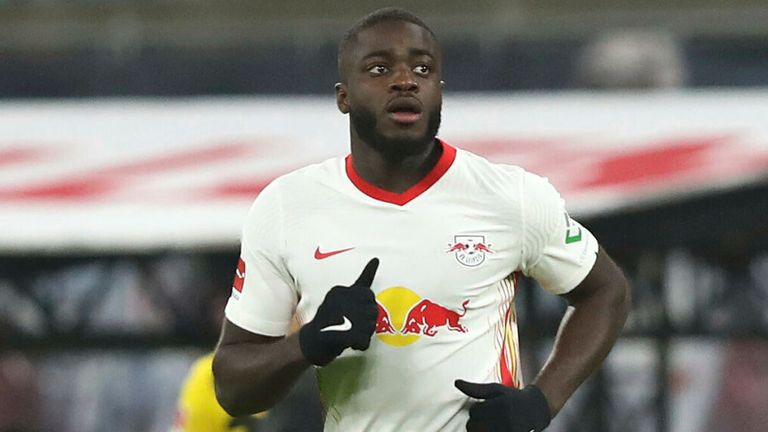 Dayot Upamecano would be the ideal January signing for Manchester United or Liverpool, according to experienced player recruitment expert David Webb.

Both clubs are looking to strengthen at centre-back in the long term and have been tracking the RB Leipzig star, who reportedly has a £40m release clause active this summer.

Webb, who has been head of elite potential ID for Mauricio Pochettino at Tottenham, Eddie Howe’s head of recruitment at Bournemouth and more recently Huddersfield’s director of football operations, believes Upamecano has developed into one of the game’s best central defenders.

“It’s an interesting one because both teams are looking to compete on all fronts, especially with Manchester United’s recent surge up the league and Liverpool’s defensive problems at the moment,” Webb told Sky Sports News.

“A particular player (I would recommend) that springs to mind is Dayot Upamecano; one I’ve known for quite a long time. He broke onto the scene when he was signed from Valencia to Red Bull Salzburg.

“I first saw him playing for France U17s. His pedigree over the last few years has developed into a top central defender, given his physical profile, and he’s very comfortable on the ball.

“He’s a player that really likes to defend, which you don’t see too often in the modern game. He’s got those old-fashioned warrior traits where he likes to defend first and play second.

“He’s very comfortable on the ball, can play out from the back and can break lines with passes – which a lot of the top teams look at – but first and foremost he likes to actually defend.

“Also given his current contract situation at the moment, he’s an appealing one for both sides looking to add quality in defensive areas.”

Webb also believes that new markets for English clubs will open up in the rest of the world following Brexit, which has seen new work permit regulations brought in for players signed from the EU, particularly South America.

One player he has tipped to make the Premier League grade immediately is River Plate’s Santiago Sosa – a player heavily linked with Everton in the past – with Argentina a particular “hotbed” for young talent.

“He’s attracting a lot of attention at the moment,” Webb said. “He’s a central midfield player that, in the transfer window prior, was heavily linked with Everton and it was looking likely that they would sign him.

“He’s a player that could come in and play now. He’s still only young and needs time to develop but he would definitely be in contention as a potential starting player, especially for an Everton or Southampton; those aspiring teams looking to break into the European places. He could fit in well at either of those teams.

“South America is a really good market and one that the German and French leagues have used really well to get the best talent. Going forward, Latin American players will be under the same scrutiny as a Northern European player.

“So there is definitely a hotbed of talent in Argentina, Brazil, Paraguay, Costa Rica… of 18 to 21 year olds, that usually get taken off by the big teams of Europe, that are going to be just as attractive to teams in the Premier League.”

The winter transfer window is open until Monday February 1 at 11pm.