Harvey Barnes scored for the second game in a row as Leicester went second in the Premier League with another late point after a 1-1 draw at Crystal Palace.

Leicester had done the same against Manchester United on Boxing Day, but their trip to Selhurst Park did not start out too well after Kelechi Iheanacho’s first-half penalty was saved by Vicente Guaita.

Palace experienced two confidence-sapping defeats, against Liverpool and Aston Villa, over Christmas and looked short in attack in the first half. But they rallied after the break, scoring with their only shot on target. Wilfried Zaha (58) started and finished a wonderful counter-attack as Palace looked to arrest their four-match winless run.

10 – Leicester City have been awarded their 10th penalty in their 16th game of the season, the earliest a team has been awarded as many penalties in a Premier League campaign, surpassing Blackburn's 25 games in 1994-95. Spotted. pic.twitter.com/enfLbn1ZNH

But Leicester, who made a number of changes for the trip to south London, found their spark in a lacklustre second-half showing as Barnes (83) dinked along the top of the area before sending a low shot home to once again secure a late point.

The result sends Leicester back into second ahead of the remaining games on Matchday 16, three points behind Liverpool, while Palace move up one place into 13th. 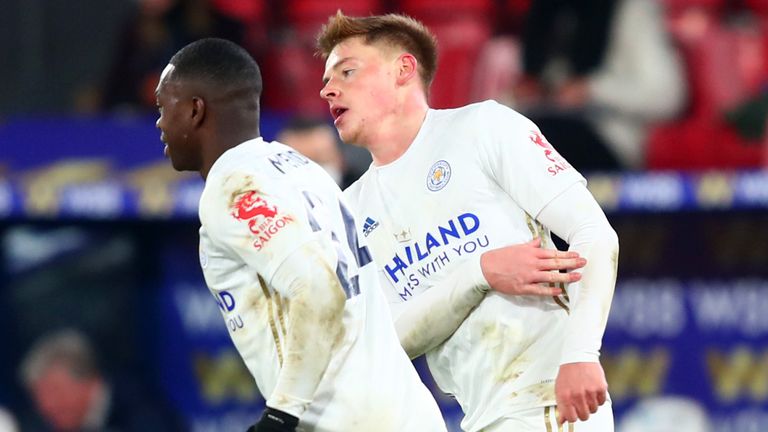 There were half-chances for both sides in the opening 15 minutes. Zaha was through on goal, but had his effort saved by Kasper Schmeichel before the offside flag was raised. Ayoze Perez could then only nod wide from Luke Thomas’ deflected cross, before Iheanacho saw his strike turned behind for a corner.

Leicester were awarded a penalty in the 18th minute after James Tomkins caught Thomas. With regular penalty takers Jamie Vardy and Youri Tielemans on the bench, Iheanacho lined it up, but a hesitant run-up allowed Guaita to guess the right way, making an ultimately comfortable save from a weak spot-kick.

Man of the match: Harvey Barnes.

Palace had their best chance of the half just before the 30-minute mark. Jeffrey Schlupp drove down the left flank before whipping the ball into the area for the waiting Townsend. However, Townsend could only direct his effort inches wide of the target with his first touch. Soon after, Iheanacho went close again, but after peeling away from his defenders, could only send a header wide from close range after it bounced off his shoulder.

Crystal Palace began the second half well and after an earlier miss caused an outburst of frustration from Zaha, he redeemed himself with a wonderful opener just before the hour on his 200th Premier League start for the club.

He was at the heart of a counter-attack, driving down the field before picking out Townsend who then lifted a cross into the area. Zaha arrived at the back post to volley the ball past Schmeichel down low at the near post.

Hunting for the equaliser, Leicester threw on Tielemans, Vardy and Demarai Gray but it was the impressive Barnes who made the breakthrough in the 83rd minute. The ball broke to the winger, who danced his way across the top of the area before hitting a low, hard shot into the corner for his eighth goal of the season. It was Leicester who pushed for the winner in the final throes. Goalscorer Barnes twice sent efforts wide of the target with Gray also firing a free-kick over the bar and Perez going close from point-blank range.

Man of the match – Harvey Barnes It was another positive display from the 23-year-old, who is growing in his role in Leicester’s attack. He was one of only four players to keep their places from the match against United, in which he also scored.

Barnes had a whopping six shots – double that of the next highest Leicester contribution. He also provided for his team-mates, making superb, direct runs and sending in four crosses. Barnes racked up the same number for interceptions too as he took advantage of some slack Palace passing at times.

Barnes has now scored eight goals in 21 games in all competitions this season – one more than he netted in 42 appearances for the Foxes last term.

Speaking in his post-match press conference, Brendan Rodgers said of Barnes: “His confidence at this level is improving all the time. Last year was his first full season in the Premier League so we’re trying to get him into areas to score more goals and take that risk in the final third.

“He practises a lot, he’s working on his shooting and finishing all the time. His goal today was great… If you see the goal again, he’s got a lot of bodies around him but the way he creates the space for the shot was fantastic. I’m delighted for him, I’ve always said he needs to improve his numbers and his assists and he’s doing that. Long may it continue.”

What the managers said 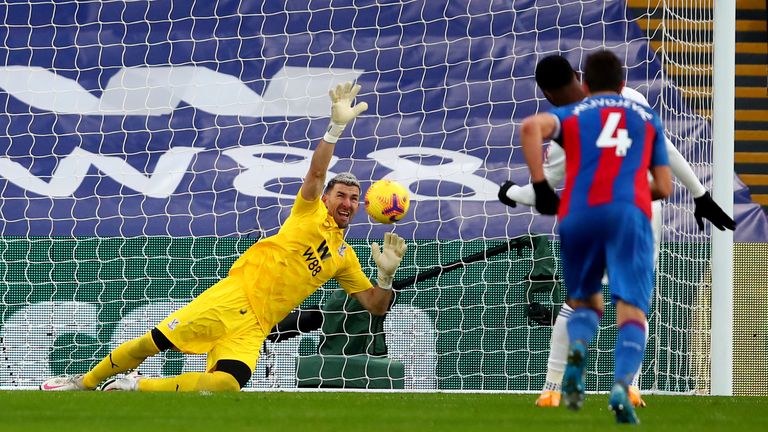 Crystal Palace manager Roy Hodgson said: “I’m really delighted with the second-half performance, which was back to the Crystal Palace I have been used to seeing and what I think we are capable of doing.

“I wasn’t at all happy with the first half and at half time, Ray Lewington was almost apoplectic in his criticism of what we were doing in that half. Luckily, it produced the required effect and we came out in the second half and did so much better.

“As a result, one may feel it’s a pity we couldn’t hold onto it but if you’re looking at the game over 90 minutes, we had to save a penalty to stay in it at 0-0 and they were so clearly better than us in the first half, I think I would have to say I am pleased with a point.

“Most importantly of all, I’m pleased we broke a very nasty sequence which has damaged our confidence and caused us a lot of pain.”

Leicester manager Brendan Rodgers said: “We’re disappointed with the result in terms of having control of the first half. We had opportunities and if we can get the first goal then it can give us a good foothold in the game. I thought we deserved that in the first half but you’ve got to take your chances.

“Second half, they started brightly in the first 20 minutes and we didn’t really get going. We gave away a goal, which we can do much better in.

“But for the second time in three days, we’ve shown a great reaction. To go behind in a game when you need a lot of physicality to get back into it, I thought the players deserved a huge amount of credit. That will help us going forward, but I thought we had enough chances and pressure to win the game.

“But like I’ve always said, if you can’t win it, don’t lose it and Harvey comes up with a great goal again. Hopefully that will be a valuable point for us at the end of the season.”