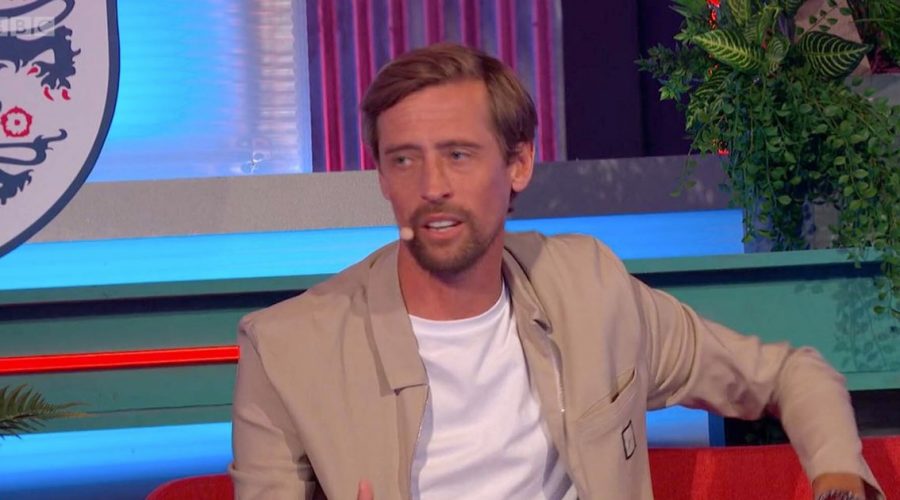 Peter Crouch has revealed – on his BBC show, Crouchy's Year-Late Euros: Live – that a comedian hired by the England squad was once kicked off stage.

England's 'golden generation' were notorious for their failings on the pitch; a side that contained David Beckham, Wayne Rooney, and Steven Gerrard failed to make a splash on the international stage.

The 'golden generation' tag is used to identify the side of the 00s, and its best result was a 5-1 demolition of Germany during a World Cup qualifier.

But, during an International break, Crouch has revealed they once kicked a comedian off stage.

"Joe [Cole] will tell you this, Rio sorted out some comedians to come to a comedy club in Manchester," Crouch began, when answering a question for TV personality Maya Jama.

"There were three of them, one of them got up as he was a Manchester comedian and he started hammering the Scouse boys, so Stevie, Carra, Wayne Rooney, and it wasn't going down too well.

"And the masseur is quite funny, and Joe said to him, 'get up, he's rubbish'. The masseur got up and was better.

"It was horrendous, it was a tough school.

Should that England side have accomplished more? Let us know in the comments section

Crouch was never a key part of the squad, however, the 6"8 former professional holds one of the best goal to game ratios for the Three Lions.

He was handed the number nine shirt for the 2010 World Cup in South Africa, but found his minutes limited – a fact he joked about on his podcast.