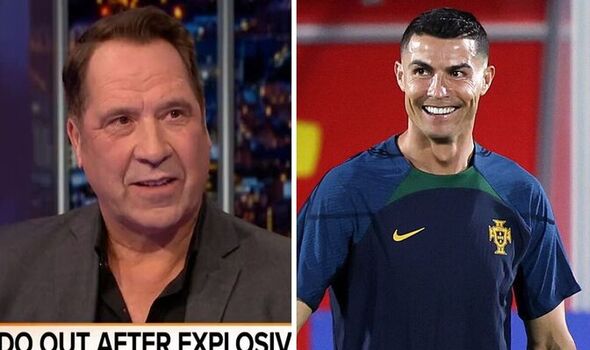 Arsenal icon David Seaman wants to see Cristiano Ronaldo make the move down to the Emirates following his explosive exit from Manchester United. Ronaldo caused a stir last week after making several revelations during his interview with Piers Morgan.

The 37-year-old took aim at Erik ten Hag as well as criticising United as a whole before his contract at Old Trafford was mutually terminated. Ronaldo said in a statement: “Following talks with Manchester United, we’ve mutually agreed to end our contract.

“I love Manchester United and I love the fans, that will never ever change. It feels like the right time to seek a new challenge. I wish Man Utd all the best.”

He’s now without a club for the first time in his professional career and is free to talk with any club. Ronaldo’s huge wages may prove a stumbling block for many clubs, but Chelsea and Sporting Lisbon have been touted as possible destinations, along with a move to the MLS.

But Seaman believes Arsenal would be “perfect” for the Portuguese superstar, who gets his World Cup campaign underway today against Ghana. “Ronaldo is far from done and he would be perfect for Arsenal,” he told TalkTV.

“I would applaud him because he’s obviously talking the truth. A lot of the stuff he came out with, is not stuff we haven’t heard.

“We have heard a lot of other experienced players moaning and criticising Man United for the way the ground is and the training. That shocked me and that shouldn’t be happening.

“He’s been all around the world and seen how everywhere has progressed and he comes back to his beloved Man United and nothing has changed. There was a lot of stuff in the interview that I didn’t know about the way he had been treated.”

United will also head into the January transfer window looking to sign a replacement for Ronaldo, with Cody Gakpo tipped as a target.

November 24, 2022 Soccer Comments Off on Cristiano Ronaldo ‘would be perfect for Arsenal’ after Man Utd exit
NFL News