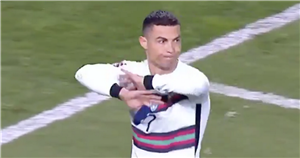 Cristiano Ronaldo was seen storming off the pitch before full time in a furious strop during Portugal's 2-2 draw against Serbia.

The Juventus superstar thought he had scored a stoppage-time winner when he got onto the end of a looping cross to stroll the ball past Marko Dmitrovic.

But when he wheeled away in celebration, the mood soon turned to anger when the referee failed to give the goal.

A replay appeared to show defender Stefan Mitrovic getting to the ball just after it had crossed the goal line.

Goal-line technology, though, was not in use for the World Cup qualifying game in Belgrade.

Ronaldo was not having it, though, and furiously remonstrated with the linesman before picking up a yellow card.

And it was all too much for the Portugal captain, who was then seen storming off the pitch and heading down the tunnel – despite the referee not blowing the whistle.

It meant that the country missed out on sitting top of Group A in the World Cup qualifying tables.

And the forward was on target again with 10 minutes to go – but it proved to be a disastrous second half for the European champions.

Fulham's Aleksandar Mitrovic struck within a minute of the restart before Filip Kostic drew Serbia level on the night.

Ronaldo's non-goal and storming off is just the latest disaster to hit the man who joined Juventus for £89m three years ago.

The Portuguese captain has come under pressure as his side are 10 points off Inter in Serie A while knocked out of the Champions League.

And it has led to speculation that the five-time Ballon D'Or winner will be sold on amid interest in Manchester United's Paul Pogba from the Old Lady.

READ MORE:Messi vs Ronaldo debate is heading for epic conclusion in 2022