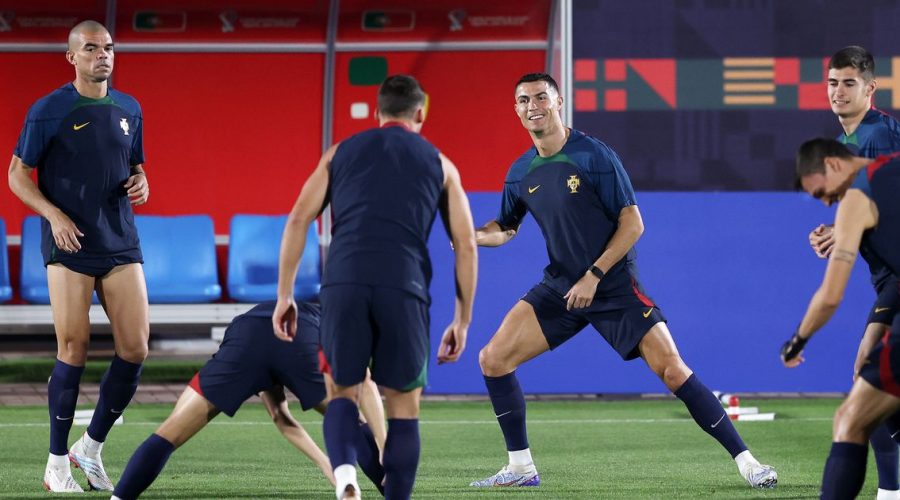 Cristiano Ronaldo has been snapped for the first time since he left Manchester United by mutual consent on Tuesday evening – just days before Portugal open their World Cup account.

The 37-year-old was snapped alongside team-mates as Portugal prepared for their World Cup opener on Wednesday afternoon. One pictures hows Ronaldo stretching out and laughing with his pals less than 24 hours after he parted ways with the Red Devils.

While more snaps show Ronaldo on his own juggling the ball as he puts his club woes behind him in Qatar. More images emerged of Ronaldo going through the motions like nothing had changed in his life, participating in Portuguese training after snubbing the press conference.

United said: " Cristiano Ronaldo is to leave Manchester United by mutual agreement, with immediate effect. The club thanks him for his immense contribution across two spells at Old Trafford, scoring 145 goals in 346 appearances, and wishes him and his family well for the future.

"Everyone at Manchester United remains focused on continuing the team’s progress under Erik ten Hag and working together to deliver success on the pitch."

What do you think of Cristiano Ronaldo leaving Manchester United? Let us know in the comments section

"However, it feels like the right time for me to seek a new challenge. I wish the team every success for the remainder of the season and for the future."

Ronaldo is currently in Qatar as he looks to get his hands on the one trophy that has eluded him in his illustrious career: the World Cup. At 37-years-old it will be the Last Dance for Ronaldo, who himself admitted he has toyed with retirement post-Qatar.

Portugal open their World Cup account against Ghana on Thursday (24 November) as they star in a group that also features Uruguay and South Korea.

All eyes will be on the Portuguese megastar when he takes to the pitch against Ghana at Stadium 974 in Qatar.