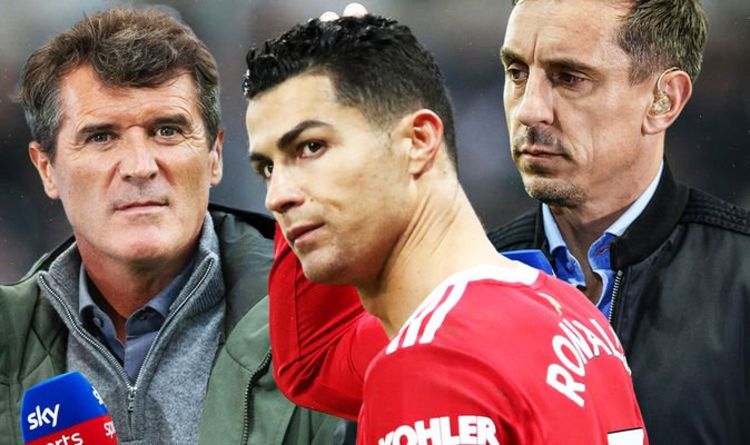 Manchester United forward Cristiano Ronaldo has split opinion since joining the Red Devils for a second time last summer. The 36-year-old has been lauded as a superstar by some pundits and has scored a number of important goals – notably in the Champions League. But he has also been slammed for his body language at times.

United paid just £12.8million to land the Portugal international from Juventus in August. And he has since scored 14 goals in 21 games for the north west side.

Ronaldo netted in all five Champions League games he played in during the group stages, scoring late winners against Villarreal and Atalanta.

But some people have suggested his presence in the United side has hindered his team-mates.

And he has also thrown strops after being left out on the starting line-up in October’s defeat to Aston Villa and failing to reach his usual high standards in last month’s drab draw with Newcastle.

The United dressing room is close to crisis, according to reports. And Express Sport takes a look at whether pundits think Ronaldo is doing more harm than good.

Former Liverpool midfielder Danny Murphy was clearly against Ronaldo’s return to United when he touched upon the subject in October.

“His presence creates more problems than it solves,” said Murphy.

“United scored plenty without him and Ronaldo’s arrival has impacted on gametime for others.

“Mason Greenwood would have had more time at centre-forward, allowing Jadon Sancho to play more on the right-wing and bed-in better than he has done.”

Following last month’s stalemate with Newcastle, Ronaldo showed his displeasure at the result by heading straight for the tunnel at full-time.

And Gary Neville, who admits the forward is one of the best players he’s ever seen, was disappointed with the player’s actions.

“The best players in your team, it’s devastating when they’re showing that look and body language to the younger ones,” Neville claimed. “They have to help them.

“They have to be the father, the grandparent in the team. I made massive mistakes at Man Utd but I had great senior players who would have a go at me but also put their arm around me I think there’s something wrong.

“At the end of the day, I love that lad. He’s the best I’ve ever seen in my life at times – but don’t run off like that. I’m not having that.”

“Let’s not be fooled, Ronaldo was shocking,” said the former striker. “He didn’t offer anything on the ball. He could have got subbed at half-time.

“I understand the size and stature of Ronaldo but, if he’s not performing, can he really be throwing his hands up at the players?

“The legend of Gary Neville can spot it too – there’s a problem in that dressing room.”

Ronaldo still has his backers and his former team-mate Roy Keane admitted that teams must accommodate their star players.

“Ronaldo has not come back to Manchester United to sit on the bench,” Keane said in November.

“He’s a world-class player. The idea Ronaldo will close people down – he’s not [going to]. But sometimes you have to work around the superstar.

“I’ve played with players who don’t do the bit you hope – the Cantonas of this world – but you forgive them because they score the winning goals in tight matches.

“His stats since he came back to the club are ok – he has got some goals and some assists.”

Rio Ferdinand took to Twitter in the aftermath of United’s 3-2 Premier League victory against Arsenal at the start of last month to mock fans who had been critical of Ronaldo.

“Cristiano is still the problem I see,” Ferdinand joked after the forward had found the back of the net twice for the Red Devils.

Former United left-back Mikael Silvestre has also rubbished claims that Ronaldo is part of the problem.

“This comment about him being a problem is absolute rubbish,” Silvestre said over the weekend.

“Look at the ratio of goals scored to chances created since the start of the season.

“He wants to win trophies – he didn’t come to United to relax pre-retirement. It’s an even bigger challenge than he’s faced before.

“Everything he’s done has been positive.”

January 5, 2022 Soccer Comments Off on Cristiano Ronaldo has backing of Man Utd legends – but is he doing more harm than good?
NFL News