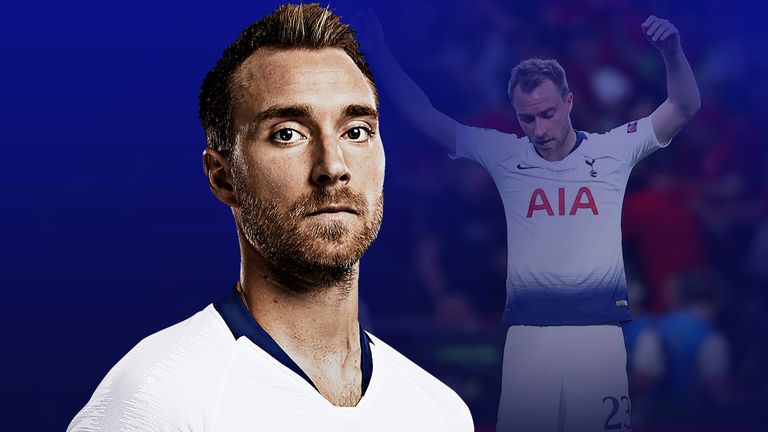 Christian Eriksen’s admission that he is considering leaving Tottenham prompted a mixed reaction among the club’s supporters, but few players have been more important to their evolution under Mauricio Pochettino. The statistics underline just how big a miss he would be.

Christian Eriksen threw his arms up in frustration and bowed his head towards the turf. The Dane had just watched Divock Origi’s low drive hit the bottom corner at the Wanda Metropolitano, doubling Liverpool’s lead in the Champions League final and all but ending Tottenham’s challenge.

It was a brutal end to a bitterly disappointing evening for Spurs, and last week it emerged that it might also prove to be Eriksen’s final appearance for the club. “I feel that I am a place in my career where I might want to try something new,” he told Danish publication Ekstrabladet.

Eriksen struggled to influence the game in Madrid, his muted display prompting criticism from those Spurs fans who feel he is not reliable enough in the big games, but if it does turn out to be his last appearance for the club, it should not cloud his outstanding overall contribution – nor the scale of the task they would face to replace him. 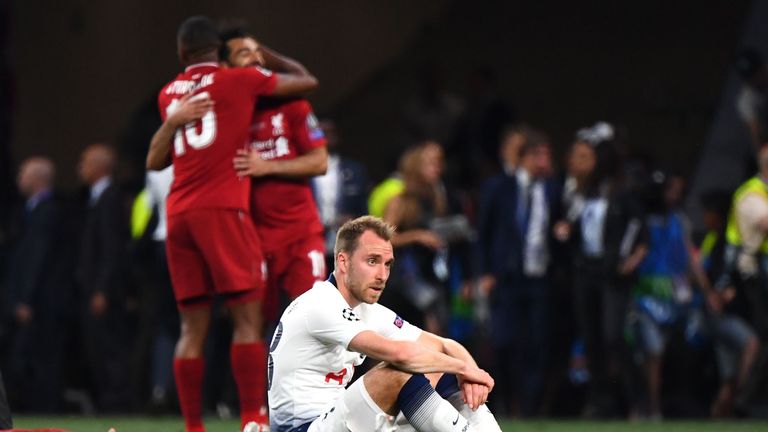 Since his arrival from Ajax in 2013, he has emerged as one of the best creative midfielders in the Premier League and indeed the world. The 27-year-old only has a year remaining on his contract, weakening his club’s position in the market, but any sale would still earn Tottenham a vast profit on the £11.5m fee they paid for him six years ago.

Even then, though, filling the void would be far from straight-forward. Eriksen’s time in the Premier League has coincided with some stellar creators, from Eden Hazard and Mesut Ozil to David Silva and Kevin De Bruyne. And yet, statistically, he has outdone them all.

Since the start of the 2013/14 campaign, Eriksen has provided 60 assists – seven more than anyone else. He has created 547 scoring chances – 17 more than second-placed Hazard. Of that total, 70 have been classified as big chances by Opta, putting him ahead of the rest in that category, too. Eriksen’s creative numbers are unrivalled, and on top of that there is his goal threat. He has scored 49 times since his arrival in the Premier League, putting him 14th in a list otherwise dominated by strikers. In the 2018/19 season alone, the man nicknamed ‘Golazo’ by team-mates scored six goals from outside the box – two more than any other Premier League player.

Still, though, there have been accusations that Eriksen’s effectiveness has dipped since Tottenham’s record-breaking 2016/17 campaign. His critics can point to declining numbers for shots and chances created since then, but it is telling that, at the same time, his numbers for passes have jumped from an average of around 56 per 90 minutes to more than 60. 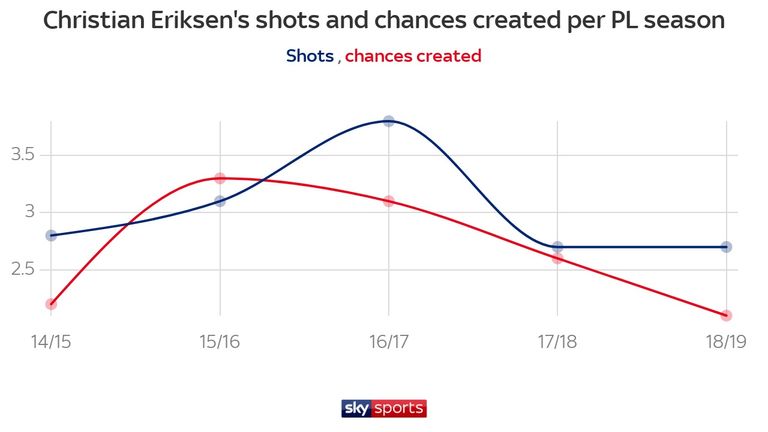 Indeed, the reality is that a lack of depth has forced Eriksen to take on more responsibility in Tottenham’s midfield, involving him more in their general play but gradually pushing him further away from the areas of the pitch in which he is most dangerous.

It is typical of his character that he has embraced the task without complaint. “I don’t mind who takes the spotlight,” he said in an interview with Sky Sports last season. “If you win the game, then it doesn’t really matter. Of course, it’s nice to get recognition, but I’m not looking for it. I just do my thing. If it comes, it comes.” 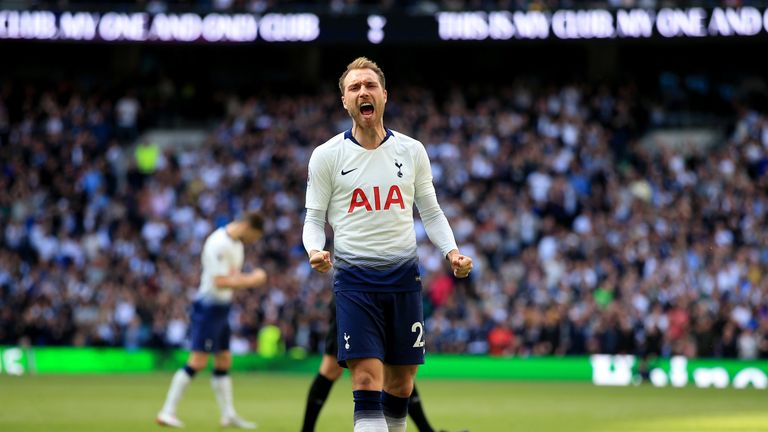 That team ethic is one of Eriksen’s strengths, but it also explains why his biggest individual contributions are often brushed over. Even this season, when his consistency was questioned, there were still vital late goals against Inter Milan, Burnley and Brighton. Without them, Spurs would not have made the top four let alone reached the Champions League final.

Eriksen’s calm and unflappable demeanour can make him appear disengaged at times, but his technical prowess on the ball has always been complemented by hard work off it. In fact, this season – and for the third consecutive year – the tracking data puts him top among Spurs players for distance covered. He averages 12.2km per 90 minutes.

That stamina has made Eriksen a perfect fit for Pochettino’s high-intensity approach, and the amount of ground he covers is all the more impressive when you consider that he barely misses a game. 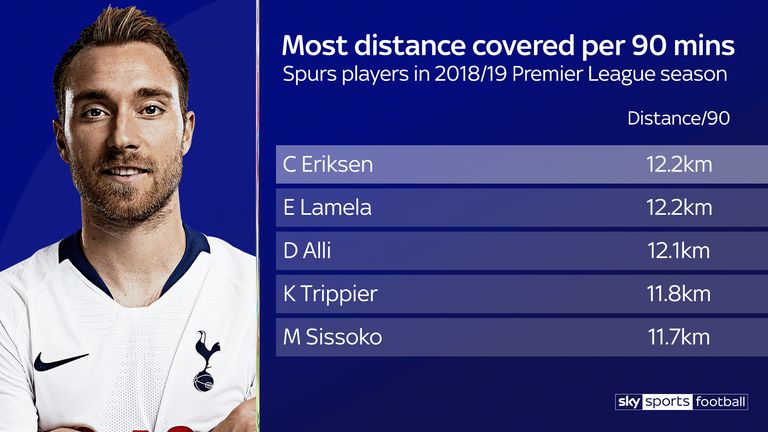 Eriksen’s resilience to injury is remarkable. Since Pochettino’s appointment in the summer of 2014, he has only been absent for nine Premier League games out of 190. In what has been a transformative period in the club’s history, no player has featured more prominently – not Harry Kane or even goalkeeper Hugo Lloris. Eriksen has been integral to the progress.

Quite how Spurs would cope without him is therefore unclear. Pochettino has learned to manage without Kane, finding solutions elsewhere in his squad during his injury absences, but with Eriksen, he has not yet needed to. In the last five years, the midfielder has never missed more than four consecutive games in all competitions. 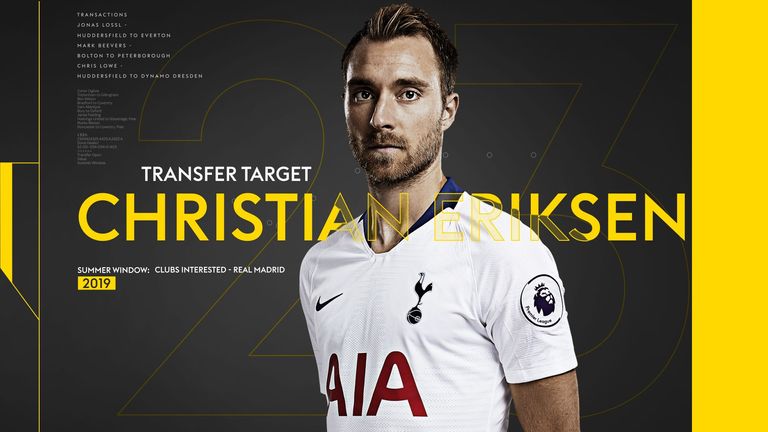 It makes the prospect of losing him even more daunting. Eriksen’s future is not decided yet. Spurs are unlikely to let him go without a fight. But if that disappointing evening at the Wanda Metropolitano does prove to be the end, then there is a major challenge ahead.

As well as keeping an eye on Sky Sports News, make sure you don’t miss a thing with our dedicated Transfer Centre blog.