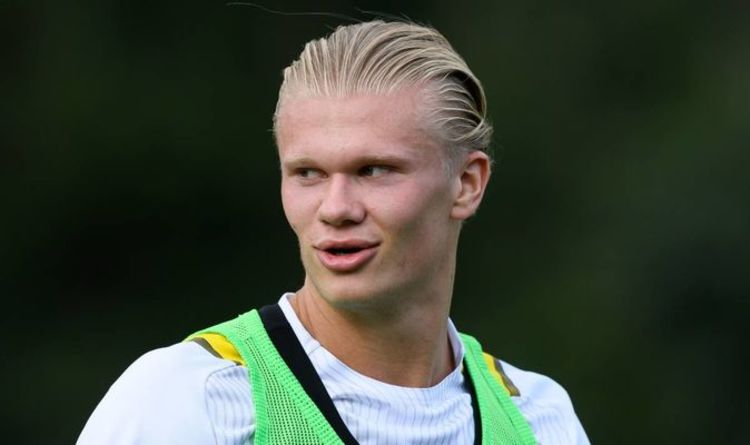 Chelsea have been warned that delaying their bid for Erling Haaland could see them fall into the same trap Manchester United did with Borussia Dortmund last year. United signed Jadon Sancho for £73million this summer but experienced the difficulties of dealing with Dortmund last year – something Chelsea may find themselves in pursuit of Haaland.

The Blues are chasing a world-class striker this summer as Thomas Tuchel aims to turn his Champions League winners into Premier League contenders.

Haaland is top of their wish list after scoring 41 goals in 41 games last season, but the Norwegian will not be straightforward to sign for Chelsea.

Having already sold Sancho to United, Dortmund are keen to hold onto their other big star ahead of the 2021/22 season.

Haaland has three years left on his contract and Chelsea would likely have to offer a transfer fee in excess of £100m just to get Dortmund’s attention.

And former Norwegian footballer and broadcaster Jan Age Fjortoft believes there are a lot of barriers in the way of a blockbuster transfer.

JUST IN: Manchester United’s next transfer priority after Raphael Varane

“I know he is the main target for Chelsea,” he said in conversation with Fabrizio Romano on the transfer journalist’s Twitch channel.

“I think everything done up to that will be through third person, through agents, whatever, to ensure that when they go for the bid, the bid will be accepted.

“There are a lot of parties here who don’t want to lose face.”

The transfer deadline is now just under five weeks away, on August 31, while the Premier League season is even closer, on August 13.

That means the clock is ticking and Chelsea will have to make their move soon, as Dortmund will not want to sanction a transfer for Haaland late in the window when they can’t find a replacement.

United publicly pursued the England winger, but eventually backed down after Dortmund stuck to their guns with a £108m asking price and hard deadline.

“Jadon Sancho last summer could have been sold to Manchester United if they had offered a price Dortmund wanted before the deadline,” Fjortoft said.

“The 14th of August is the first game of the season, they’re playing Eintracht Frankfurt at home, I think we have to go backwards from there.

“I think that the deadline in my head will be around the first week of August.

“This time, Dortmund haven’t said anything about a deadline, I don’t think they were so happy about last year because the whole world’s press was waiting for the date and saying they didn’t mean it – they meant it.

“This time, I don’t think they’ll put a date out there, but should Chelsea do anything or agree with Dortmund, that has to be done in the next week, I think it is fair to say.”