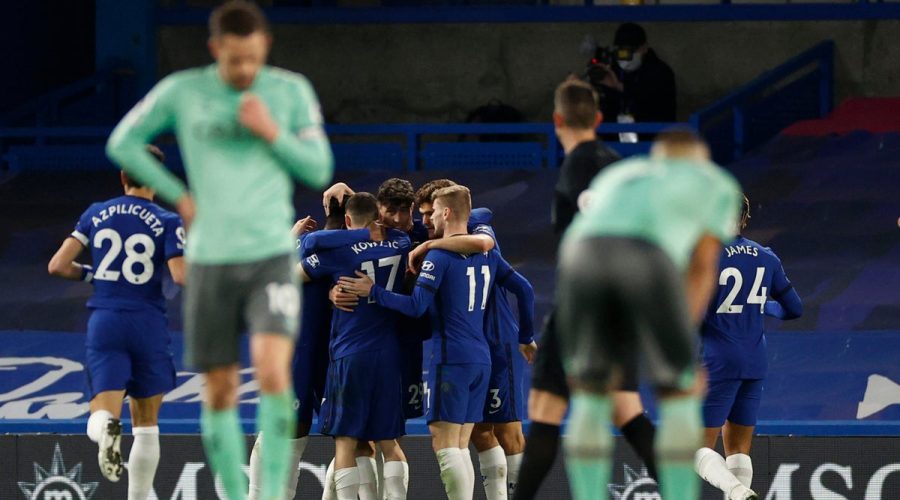 Chelsea made it back-to-back wins against Merseyside clubs after beating Everton 2-0 in the Premier League on Monday night.

The home side dominated the early parts of the game without having too many clear openings, but they took a deserved lead around the half-hour mark after Kai Havertz’s side-footed shot was deflected in by Ben Godfrey.

After the break the game became a rather more stretched affair, with Havertz having another fine strike ruled out for handball as he controlled, minutes before Richarlison swiped a good chance well off-target at the other end.

Reece James fired one wide and Callum Hudson-Odoi had an effort tipped over, but it was Havertz who again found the route to the all-important second as he latched onto a through pass and rounded Jordan Pickford – who brought him down, leaving Jorginho to net the resulting penalty. Timo Werner missed a succession of chances to wrap up the points, Zouma headed on-target and Pickford saved from Kante, as Chelsea threatened to run riot late on.

Here are five things we learned as Thomas Tuchel’s side made it 11 unbeaten since the German boss took over.

The end of January was Kai Havertz’s last start in the league, so it was a welcome return to the 11 from his perspective – and he certainly had a very positive impact on his team’s performance. The German too up a central role in more ways than one, playing a free-roving role where he dropped out of the No. 9 zone to link play as often as he made runs in behind the defence.

As might be expected after another five game injury absence, with just a single cameo outing at the end of it, not every touch was perfect: a few moments of control were lacking, the odd pass fell short.

But by and large he was impressive, growing in confidence as the game went on, always forward-thinking with his movement and ultimately showing more clever movement off the ball than Everton were capable of handling.

Before this game they had kept three straight clean sheets, but Havertz – directly or indirectly – found a way through on three occasions: an own goal off his shot, one ruled out and the winning of the penalty.

This is much more like the leading talent Chelsea hoped they were getting when they signed him for such big money.

While Everton’s three-match shut-out streak came to a fairly abrupt end, Chelsea’s own defensive work has been a hugely impressive and notable feature of their play under Tuchel.

This was a ninth clean sheet in 11 since he took charge, with just Sheffield United and Southampton finding a way past the reestablished back-three set-up.

Edouard Mendy didn’t have too many scares – until Godfrey flew into him hip-first at a corner, at least – but it was largely thanks to yet another excellent showing from Andreas Christensen.

The centre-back’s form has been nothing short of superb of late and this latest accomplished performance might be well-timed, given Thiago Silva’s reappearance on the bench.

A big feature of Tuchel’s reign so far has been his switching of the attacking options, with several players being handed starting chances to impress – though Christian Pulisic was a repeat omission and Tammy Abraham isn’t even making the bench in every game.

This time out, along with the aforementioned Havertz, the alteration was pushing Callum Hudson-Odoi back into the front three rather than using him as the right-sided wing-back outlet.

A bright start and a huge volume of off-the-ball work from the English attacker showed why he has been so regularly involved, while Timo Werner impressed in fits and starts – though mostly after his manager berated him for wandering so frequently from his right-sided station.

It remains notable, though, that when the game started to get stretched and Everton got a foothold, it was Mason Mount who was summoned first off the bench. If Havertz produces more of this type of performance, it might quickly be that two of the three positions are set, with Mount already proving his worth with regularity.

Ends of the spectrum

It was far from vintage Everton, but a handful of players still served a reminder of the qualities which have seen them move into European spots.

Ben Godfrey was again very good in defence and more than capable stepping upfield in possession, while behind him – despite conceding the penalty – Pickford had one of his better games of the season with a number of decent saves.

Allan was also typically assured in the challenge, if somewhat bypassed by Chelsea’s flowing moves at times.

At the other end of the scale, Dominic Calvert-Lewin barely got into the game, Andre Gomes was a passenger in midfield and none of the substitutions, or the tactical alterations they brought, had any impact whatsoever.

Though not a terminal blow to Everton’s top-four chances, given they still have a game in hand on the teams above them, this was another 90 minutes which suggested the Toffees will fall a little short this season in trying to reach the Champions League.

The gap from fourth to fifth is now four points, not insurmountable but also with not much room for error heading into the last 10 or 11 games of the season.

Chelsea, meanwhile, will have eyes in only one direction: above them.

They are in far more consistent form than Leicester and are not dealing with the injury crisis the Foxes are, while even Man United – second, four points above Chelsea – don’t have the same rate of earning points as Tuchel’s side of late.

Add in the Champions League and FA Cup games ahead and there’s still plenty to fight for this season at Stamford Bridge.