Chelsea are on the verge of completing a deal for Rennes goalkeeper Edouard Mendy and they will then press ahead with their plans to capture the final piece of their summer transfer jigsaw – West Ham ace Declan Rice.

Transfer expert Fabrizio Romano has confirmed that Mendy is on his way to London to complete his transfer to Chelsea.

The Blues failed in an initial bid of around £14million but have had a second, improved offer accepted.

It is claimed personal terms were agreed earlier this week and only the medical remains before the transfer can be announced.

Frank Lampard’s total expenditure on new recruits will rise to around £250m as he looks to close the gap on Liverpool and Manchester City. 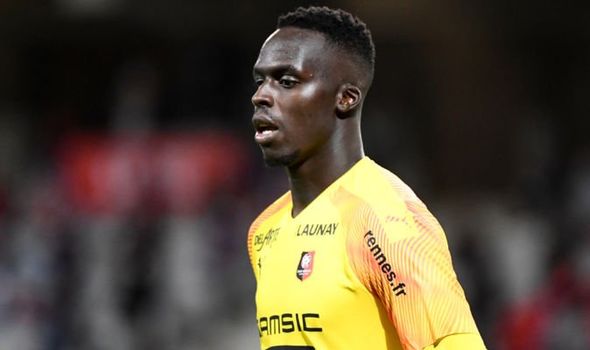 But his transfer kitty is not yet empty as Romano expects him to press ahead with his plans to capture Rice.

“Edouard Mendy will be in London in the next few hours – the deal is 100 per cent done,” Romano tweeted.

“Chelsea will consider a move for Declan Rice in following days but won’t pay €80m.

“West Ham insist they don’t want to sell Rice. Match on. Bakayoko is not in Lampard plans.”

West Ham have stood firm all summer in their valuation of the England international and do not want to lose him on the cheap.

Lampard originally planned to convert Rice, who plays a holding midfield role for the Hammers, into a centre-back.

Chelsea conceded more goals than any other side in the top 10 of the Premier League last term.

However, that thought has changed following the arrival of Paris Saint-Germain captain Silva on a free transfer.

The Blues could offload either N’Golo Kante or Jorginho with interest coming from Serie A.

Rice would be expected to plug the gap and stick to his natural position if those stars depart.

September 11, 2020 Soccer Comments Off on Chelsea set to bid for next target after Edouard Mendy jets to UK to complete deal
NFL News