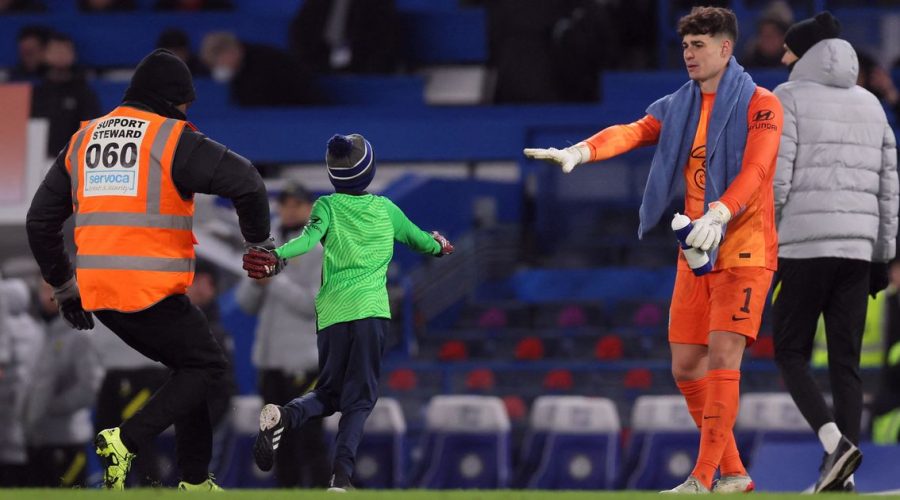 Kepa Arrizabalaga made one young supporter’s night with a touching gesture following Chelsea’s win over Tottenham on Wednesday night.

The Blues eased to a 2-0 win over Spurs in the first leg of their Carabao Cup semi-final at Stamford Bridge.

Kai Havertz gave them the lead after just five minutes after Japhet Tanganga gave the ball away to Marcos Alonso.

Thomas Tuchel’s side doubled their lead in a strange manner when Tanganga headed a free-kick into Ben Davies, who scored an unfortunate own goal.

Romelu Lukaku had a few chances, but could not score Chelsea’s third on return to the side after being dropped from the squad for the 2-2 draw against Liverpool on Sunday.

Kepa pushed away Tottenham’s only two shots on target from Harry Kane and Giovani Lo Celso in the second half – and one fan was very keen to congratulate him after the final whistle.

The young supporter ran onto the pitch at Stamford Bridge and tried to make his way to the Spanish keeper.

Stewards attempted to intervene and lead the child off the playing surface, only for Kepa to insist that he speak to him.

HAVE YOUR SAY! What did you make of Chelsea's performance? Comment below.

The fan, who was wearing a Chelsea bobble hat, goalkeeping top and gloves, was allowed to reach Kepa, who rewarded him by giving him his match-worn gloves.

He was then walked off the pitch by stewards and applauded by those still inside Stamford Bridge.

It was a fitting end to a good night for Chelsea, who were well deserving of their victory.

The only low points were injuries to Cesar Azpilicueta and Kai Havertz, who both left the pitch in the second half.

Tuchel later confirmed that Azpilicueta’s substitution was a mere precaution due to cramp, but Havertz had suffered a suspected broken finger.

“He played through the pain in the first half but then it was too much,” Tuchel said.

Chelsea, who were without N’Golo Kante and Thiago Silva following positive Covid tests, face Chesterfield in the third round of the FA Cup on Saturday before the Carabao Cup semi-final second leg with Spurs on Wednesday.