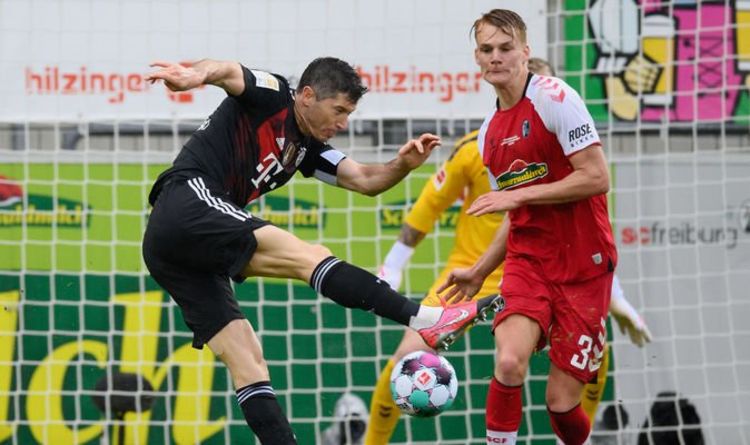 Robert Lewandowski: All you need to know about Polish striker

Chelsea have reportedly turned their attention towards Bayern Munich’s Robert Lewandowski in a new attempt to get a top-class striker through the door this summer. Their well-publicised pursuit of Erling Haaland may have hit a dead end, and the club seem to be considering other options.

In turning their attention towards Lewandowski, they have pinpointed one of only two men to have outscored Haaland in the Bundesliga last season.

At 32-years-old, he would not be a long-term option at Stamford Bridge, but being one of the best players in the world would still set the Blues back a pretty penny.

Express Sport takes a look at three candidates who could be offered in a swap deal for Lewandowski over the coming days:

As mentioned, Abraham has already been offered to Bayern’s Bundesliga rivals in an attempt to lure Haaland to the Bridge.

Although he wasn’t to BVB’s liking, he still has plenty to offer for a top club being 23-years-old, 6ft 4in and a strong finisher.

Unfortunately for the Englishman, he has found himself frozen out under Thomas Tuchel, leaving him looking for a move away over the coming weeks.

Chelsea value him at around £50million, so he would make a significant dent in the fee needed to recruit an ageing Lewandowski.

Chelsea’s talented 20-year-old has been linked with Bayern as far back as 2019.

Back then, the Blues handed him a lucrative new deal to show their commitment to the winger, although he has failed to truly establish himself in the first-team since then.

Still, it is hard to criticise that fact based on his age, something Bayern clearly recognise as their interest regularly resurfaces around the England international.

The downside for Hudson-Odoi is that they already appear fairly well-stocked for wingers in Bavaria, flaunting the likes of Leroy Sane, Serge Gnabry and Kingsley Coman in their current ranks.

Still, Chelsea could do worse than to test the waters regarding a player the German giants have registered concrete interest for in the past.

The Moroccan made a strong statement on Saturday afternoon when he bagged a hat-trick in Chelsea’s first pre-season outing against Peterborough.

Granted, he will face much tougher opposition when the season starts properly, but it has momentarily hushed the rumours linking him away from the club.

The 28-year-old can count himself unlucky, arriving during the Frank Lampard era, only to immediately be struck by injury and find himself under new management.

In truth, the roaming attacking-midfielder does not fit perfectly into Chelsea’s system, and with AC Milan sniffing around him for £40million, Chelsea could also consider putting him on the table during their negotiations with Bayern.