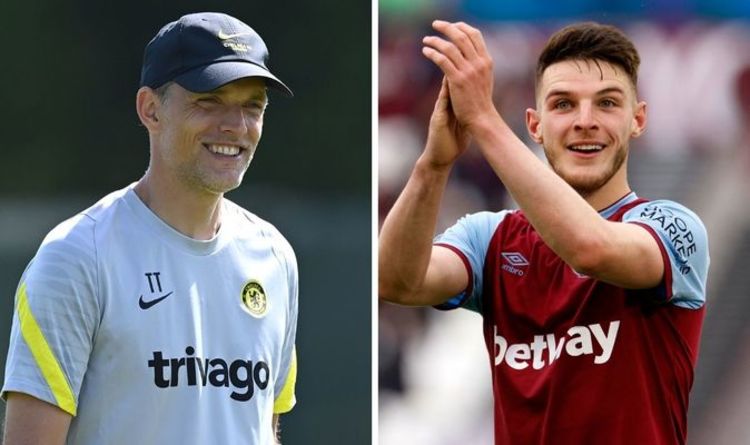 West Ham are desperate to keep hold of Declan Rice this summer but Chelsea may have a route to signing the midfielder for just £60million. The Blues were strongly linked with a move for Rice 12 months ago with Frank Lampard keen to sign the England international.

West Ham’s £80m asking price proved too much for Chelsea, who had already splashed out close to £250m on new signings.

Lampard has since been replaced by Thomas Tuchel, who led Chelsea to win the Champions League.

And Roman Abramovich has promised to back the German head coach in his first summer transfer window as Chelsea boss.

No new signings have been made yet, but numerous reports indicate the likes of Erling Haaland, Domenico Berardi and Robert Lewandowski among the players Chelsea are interested in.

But they also remain interested in Rice, who enjoyed an excellent Euro 2020 campaign with England.

The 22-year-old started all seven of England’s Euro 2020 games and earned high praise for his performances.

That has seemingly further enhanced Chelsea’s interest in stealing him away from their London rivals.

West Ham have reportedly tried to tie Rice down to a new contract this summer, but to no avail.

The Telegraph’s Matt Law claims Rice would currently turn down a third contract offer from West Ham and suggests a £60m bid from Chelsea would tempt the Hammers into selling.

“Declan Rice would reject a third contract offer from West Ham. He wants to be made aware of any bids made for him,” he said on the London is Blue podcast.

“West Ham would have to have a serious think about any bid that came in over £60m because of the situation.”

Rice is yet to return from his summer break and join up with the West Ham squad.

But David Moyes is clearly confident that Rice will be at West Ham for the start of next season.

With stadiums set to be full from the opening weekend of the Premier League season and West Ham hosting Leicester on August 23, Moyes is hopeful of seeing a packed crowd turn up to watch Rice and his team-mates at the London Stadium.

“We are excited because as we know it’s such a great stadium to host so many people,” Moyes said.

“We have big, big crowds at every game now because the team has done so well.

“If I was a West Ham supporter I’d be wanting to get in and get a ticket to the game because what I’m seeing is Declan Rice, you’ve got Tomas, you’ve got Micky Antonio, we’ve got a really, really exciting team in the making at the moment, so I think I’d want to come and watch.”