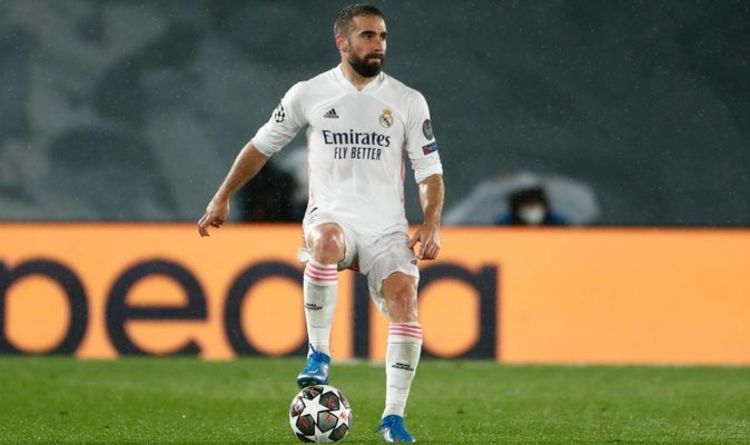 Chelsea’s chances of reaching the Champions League final have been handed a boost following an injury to Real Madrid defender Dani Carvajal. The right-back is expected to miss the rest of the season after picking up a hamstring injury in the first leg on Tuesday.

Carvajal started against the Blues earlier this week, playing at right wing-back as Zinedine Zidane opted to match Chelsea’s formation at the Estadio Alfredo Di Stefano.

The 29-year-old managed 77 minutes before he pulled up clutching his leg and was replaced by Alvaro Odriozola for the closing stages of the 1-1 draw.

Subsequent tests have revealed that Carvajal has suffered a tear to his hamstring and, according to Spanish newspaper Marca, he will miss the remainder of Los Blancos’ campaign.

A club statement said: “Following the tests carried out today on our player Dani Carvajal by the Real Madrid medical department, he has been diagnosed with an injury to the semimembranosus muscle in his right leg.

“His recovery will be monitored.”

Carvajal has been plagued by injuries this season and has only made 15 appearances across all competitions for Real.

JUST IN: Hazard slammed for poor attitude in Ronaldo and Messi comparison 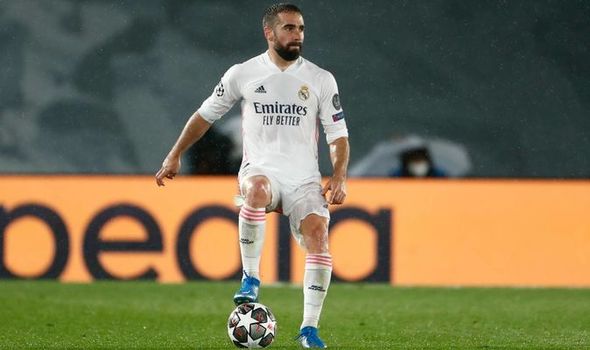 The first leg against Chelsea was just his third game back following a two-month absence with a muscle injury.

His injury is bad news for Zidane, who is short of options on the right-side of defence.

The Real manager has been forced to play forward Lucas Vasquez in the position during Carvajal’s absence, but Vasquez is also out for the season after picking up a knee injury in their 2-1 win over Barcelona in El Clasico on April 10.

Zidane played Federico Valvede at right-back as they picked up a 0-0 draw in their quarter-final second leg to overcome Liverpool at Anfield earlier this month, but the midfielder missed the Chelsea game after testing positive for coronavirus.

Lampard may consider Spurs job as Chelsea rivalry ‘not a dealbreaker’

Odriozola is likely to continue in the position, while Nacho, who has also filled in at left-back, could be shifted to the other side of defence to plug the gap.

Real could also be without left-back Marcelo for the second leg after the Brazilian was called up for polling duty in Madrid’s elections next week.

The Spanish giants are contesting the decision and could still have the experienced defender available for the tie at Stamford Bridge on Wednesday, but his involvement is not certain at this stage.

Christian Pulisic’s composed finish has handed Thomas Tuchel’s side the advantage for the second leg, with the Blues holding a valuable away goal.

Karim Benzema equalised with a powerful volley but Zidane’s side faces a difficult task against the stingy Chelsea defence in West London next week.