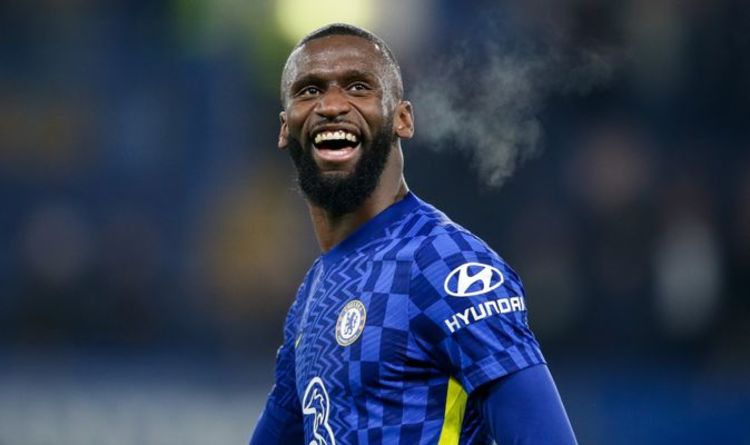 Chelsea have been given a fresh reason to tie down contract rebel Antonio Rudiger to a new deal following their win over Juventus in the Champions League. The Blues secured their place in the knockout stages with a comfortable 4-0 win over the Serie A giants.

Trevoh Chalobah opened the scoring with a thumping finish after the ball became loose in the box from a corner.

Reece James doubled the hosts’ lead 10 minutes after the break when he brought Ben Chilwell’s deflected cross down in the box before volleying into the far corner.

The right-back was involved again for the Blues’ third goal, with a sharp interchange of passes handing Callum Hudson-Odoi the chance to get himself on the scoresheet with a composed finish.

The scoring was completed in the fifth minute of injury time when Timo Werner was on hand to tap-in Hakim Ziyech’s cross.

It was not all plain sailing for Thomas Tuchel’s side though, with Thiago Silva forced to produce a magnificent goal-saving clearance with the score at 1-0.

But it was a well-deserved win for the Londoners, who have climbed above Juve to sit at the top of Group H.

That victory has also highlighted the importance of Rudiger, as if further evidence was needed of how crucial the German is to Tuchel’s side.

Rudiger has become one of Tuchel’s most reliable players after the former PSG boss brought him in from the cold after replacing Frank Lampard.

The 28-year-old has marked himself out as one of the best defenders in the Premier League with his performances since Tuchel’s appointment.

But Chelsea are facing up to the very real possibility of losing him for nothing at the end of the season when his contract expires.

The Blues are locked in talks with Rudiger and his representatives, but are understood to be reluctant to match the defender’s wage demands.

Goalscorer Chalobah has now made it clear why Chelsea should find a breakthrough with Rudiger as soon as possible.

“That was the main focus to get the win. It’s my first ever trophy and I’m delighted to get this,” he said following Tuesday’s win.

“It meant a lot, when I was a young kid I used to watch the Champions League, and now to be involved was emotional.

“I decided to put so much power on it and that was it. Rudiger is always helping me every day. Thiago as well – everyone at the club really.

“I like to set an example for the younger kids coming up. Hard work pays off.”

Rudiger’s mentorship of the younger members of Chelsea’s squad will undoubtedly help them for years to come, with the Blues now needing to make his contract talks a priority.