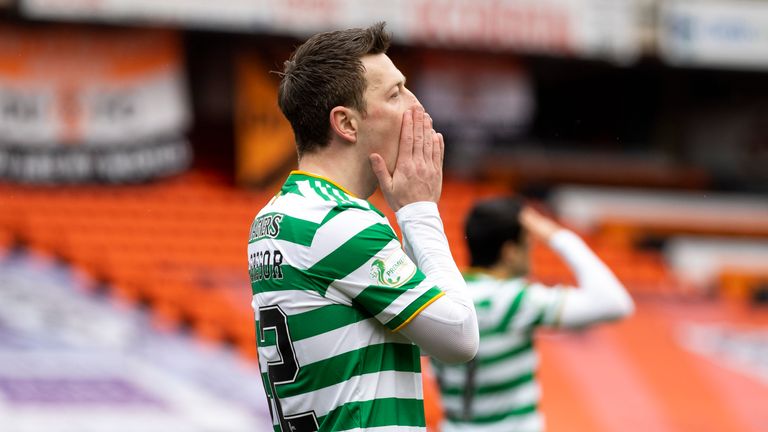 Since making his Celtic debut in 2014/15, McGregor has known nothing else than ending the season as Premiership champions until this season, when Sunday’s 0-0 draw at Dundee United handed Rangers the trophy for the first time in a decade.

McGregor and his team-mates will welcome their oldest rivals to Celtic Park in their next game on March 21, live on Sky Sports, and may welcome them to the pitch with a guard of honour, before watching them lift the trophy in the Gers’ final game of the season later in the campaign.

“We’ve been so used to success and when you experience this it’s sore, everyone sees it. To watch them lift the trophy will be sore and will fuel the fire for next season,” McGregor told Sky Sports.

“Everyone’s hurting. The fans will be hurting as well. It’s the end of that nine in a row, but we have to come again. The reason we’ve been so good is when we faced setbacks we’ve come back even stronger, so where we are at the moment, we have to look at ourselves, get better in training, and come again next season. That’s what champions do.”

Celtic’s draw at Tannadice told a familiar tale of missed opportunities with John Kennedy’s side unable to turn any of their 27 shots into goals, something McGregor felt ultimately proved the story of their season.

He said: “It’s a sore one, to be so dominant in the game. First half was shot after shot, it really sums up where we are at the minute, lacking that clinical edge we’ve had in seasons gone by.

“The first half was good, second half we still created a lot of chances as well, but it’s a sore one as well.

“We’ve been getting big numbers regularly in terms of chances but not putting that away, whether that’s down to confidence in front of goal, it sums up the season.

Kennedy: We won’t stand back and let Rangers dominate

Caretaker manager John Kennedy only took over the reins at Celtic Park two games ago, having served as a first-team coach during the unstoppable Brendan Rodgers era and as assistant manager to Neil Lennon when they continued their league dominance in 2019 and 2020.

He told Sky Sports Celtic would not stand by and let Rangers assert a level of consistency they had seen themselves over the previous decade.

He said: “I’m disappointed, our objective at the start of the season was to get to 10, it hasn’t happened for a number of reasons, but ultimately Rangers have been better than us for the course of the season. They’ve deserved to win it, we’ve just got to accept that and get on with it.

“I hope it does a lot, we’ve been champions for so long, so much success, not just in the league but in the cups too. At some point you have a blip, I think we’ve had our blip, it’s not been good enough, we won’t shy away from that.

“But it’s not about giving up, about standing back and letting someone else dominate, we’ve still been the dominant team in recent times and we want to get back on course as quickly as we can.”