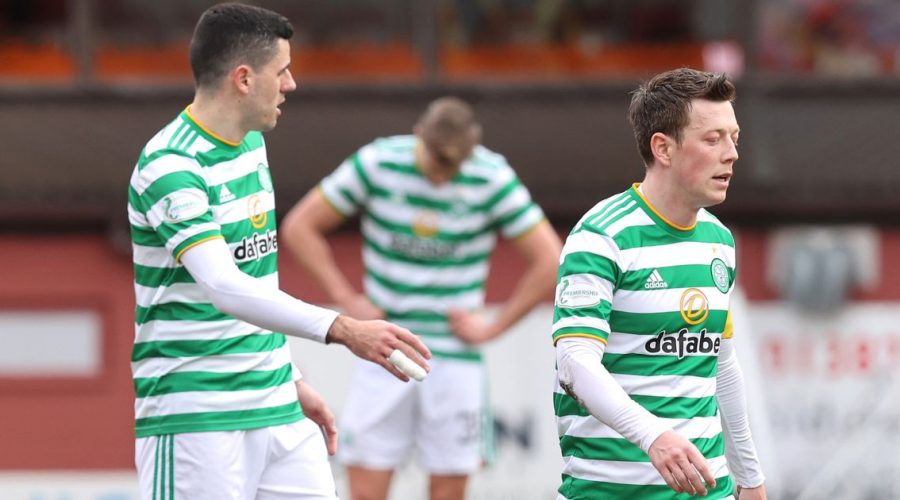 Rangers have been crowned Scottish champions for the first time in 10 years following Celtic’s 0-0 draw away at Dundee – and now their Old Firm rivals must decide whether to give them a guard of honour or not when they meet next week.

Steven Gerrard’s side have romped home to Scottish Premiership glory in sensational fashion this season, with Celtic’s latest shortcoming handing them an unassailable 20-point lead at the top of the table.

They have not lost a league match all season, registering 88 points out of a possible 96 and only conceding nine goals in 32 games.

For Celtic, Sunday’s draw at Dundee marks one of the lowest moments in their recent history.

The Hoops have seen their 10-year stranglehold on the Scottish Premiership come to a humiliating end, and they’re now faced with a big decision to make ahead of next weekend’s Old Firm derby.

Interim boss John Kennedy and co must decide whether to give the newly-crowned champions a guard of honour or not when they meet at Celtic Park next Sunday, which would be a bitter pill to swallow for their supporters.

Nevertheless, Celtic chiefs could point to Rangers’ refusal to do the same when the shoe was on the other foot in 2019 as justification if they decide against it.

Gerrard said at the time: “The club have made a decision on that and decided there won't be a guard of honour, so my thoughts are irrelevant.

“I will follow what I'm told to do by the people in charge of the club.”

Celtic were incensed by that decision in 2019, with Neil Lennon – who resigned as Hoops boss last month amid a disastrous defence of their title – insisting they would have acted differently in the same situation.

“I think we would have done it if the shoe had been on the other foot. But it’s not a major issue for me,” Lennon said.

“It would have been a touch of class if they did it. I’m disappointed they are not. Celtic would have done it.”

March 7, 2021 Soccer Comments Off on Celtic to decide whether to give Rangers guard of honour before Old Firm
NFL News