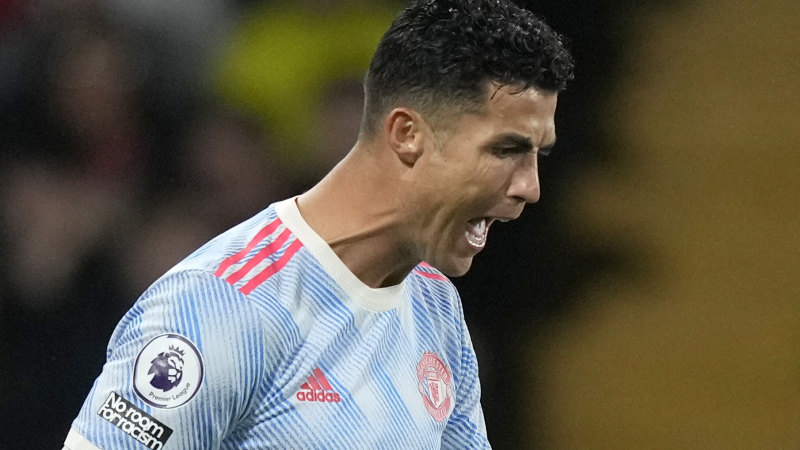 Villarreal: Manchester United will hope Michael Carrick can fashion a plan to save some face against Villarreal on Wednesday morning (AEDT), find a way to plug the holes and focus players’ minds.

They will hope he can bring some structure to a defence that has shipped 19 goals in seven matches, despite having a goalkeeper in impressive form.

That he can lift standards, restore some pride, bring some order to the chaos and deliver the sort of bounce Ole Gunnar Solskjaer once did.

However, if tonight brings more of the same dysfunction that got Solskjaer sacked, then no one will be too surprised.

In United’s first dealings with the media since Solskjaer was dismissed in the wake of a seventh defeat in 13 matches, Carrick negotiated some difficult questions with the same care and precision with which the former midfielder used to circulate the football.

Ultimately, though, how much can United fans realistically expect to change when the people temporarily entrusted to stop the rot are the same coaches in whom Solskjaer placed his faith? 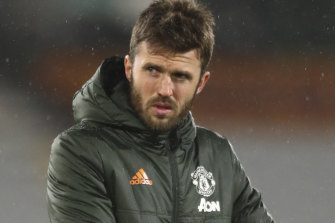 Interim manager Michael Carrick says he is ‘clear in my own mind’ what United need to do to right the ship.Credit:Getty

United’s dishevelled, despondent players who, in the words of goalkeeper David de Gea, “do not know what to do with the ball” or “how to defend properly”, will be taking instruction from the same individuals – minus Solskjaer – who have presided over this mess. The Norwegian has gone but Carrick, Kieran McKenna and Mike Phelan all remain.

This is not a position any football club, let alone one of the richest and most powerful on the planet, would ever want to be in: leaning heavily on the coaching team of the manager they have just sacked while they search for an interim to replace the man who was once the interim to get them through the season before a permanent appointment is made.

Events could unfold at Paris Saint-Germain that allow United to appoint Mauricio Pochettino much sooner than the end of the season or maybe another leading candidate for the full-time job will suddenly become available. 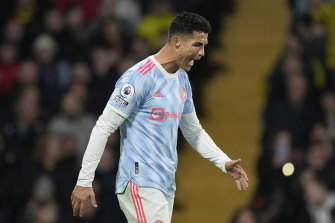 Cristiano Ronaldo after a disallowed goal during United’s embarrassing 4-1 loss to Watford at the weekend.Credit:AP

But, until that time, United are in the service of Carrick for as long as it takes to find an interim upgrade, and that process may require even more haste and compromise should the slide continue in Spain this evening and at Premier League leaders Chelsea on Sunday. And that is the problem here: what if Carrick cannot buy the club some time? What if Villarreal and Chelsea go the way of the Watford, Liverpool and Manchester City games and the situation gets even uglier? There are, after all, another six months of the season left.

Carrick was keeping his cards close to his chest when asked if the fans could expect anything different. But it would be nice to think he might emerge, at least in part, from Solskjaer’s shadow and be bold enough to make some of the changes the last manager resisted right up until he was relieved of his position.

Donny van de Beek, the seldom seen Holland midfielder, did enough in the second half against Watford to warrant an opportunity against Villarreal and Jesse Lingard also deserves a chance.

The alternative is to keep faith with players who, as Harry Maguire admitted, are going through “the toughest time of their career at club level”.

Maguire clearly counts himself in that bracket. The collapse in the captain’s game has perhaps been the most startling of the lot and Rio Ferdinand, the club’s former defender, believes it has got to the point where the England centre-half needs to be taken out of the firing line.

Maybe Carrick would be more willing to do that if Raphael Varane was not injured, but Eric Bailly’s chaotic performance in the Manchester derby defeat earlier this month might well discourage the caretaker from pinning his hopes on a Bailly-Victor Lindelof partnership. Scott McTominay often plays in central defence for Scotland but the midfielder’s own confidence is fragile enough and a switch to that position in this of all weeks is hard to envisage.

Maguire spoke yesterday about the players needing to “take responsibility for everything” and “finding something within ourselves and the group to move the club forward” but, as Carrick stressed, only actions will do now.

United have not found it easy in Spain, even in happier times. They have won on just five of their previous 28 visits. Victory will guarantee progress to the Champions League knockout stages with a game to spare and what a lift – however fleeting – that would give everyone after the events of recent days. But a draw would be good enough if Atalanta fail to beat Young Boys.

What they cannot stomach is another bad defeat, all the less so with the reigning European champions and England’s best team on form to follow at Stamford Bridge.

November 22, 2021 Soccer Comments Off on Carrick suggests more of the same for match United dare not lose
NFL News