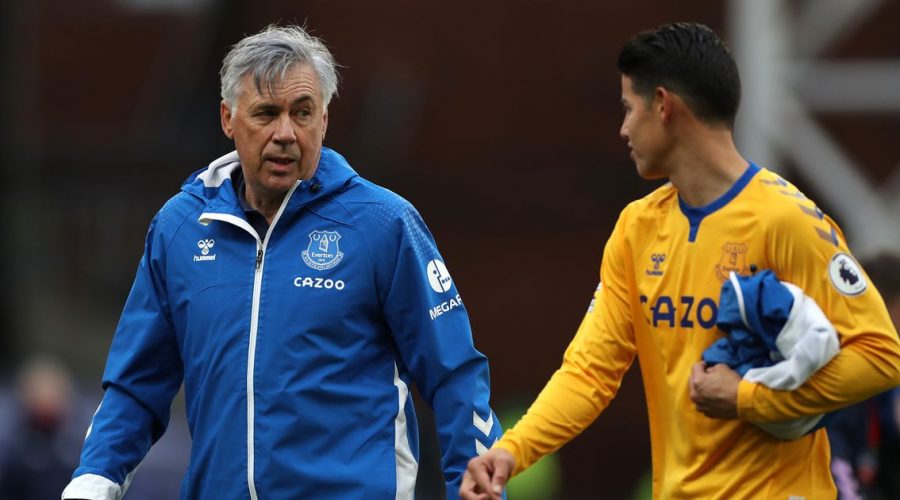 Carlo Ancelotti is banking on the creativity of James Rodriguez to inspire an Everton top four charge.

And the Blues boss has hinted that could persuade the club’s owners to exercise a clause in the superstar’s contract which gives them an option to extend the deal with him for a further year.

The Colombia international scored a stunning goal to give his side a valuable point against high-flying Leicester, with a fierce shot on his weaker side that had his manager joking: “Unbelievable…I’m not used to seeing James score with his right foot!”

It was a vital contribution from the midfielder, with Everton looking to cement their place in the top four, as they stand within a win of the Champions League places, with games in hand on all their rivals.

But they struggled to create chances for their forwards in the game, as Leicester dominated possession.

And Ancelotti believes the midfielder is the key to more threat from the Blues, as they face huge games against Manchester United and Liverpool in the next few weeks.

“The problem for us was not defending deep…when we had the ball we didn’t have opportunities to play as we wanted, or to find players between the lines, to play more for James or our strikers,” he said.

“We did that more after they equalised, we had more control of the game with the ball. It is important to know how we play and the qualities we have, to use the threat that we have in the attacking positions.”

Where will Everton finish in the table this season? Have your say below.

James has been a key performer in Everton’s surprise top four bid, and Ancelotti acknowledged that when he suggested he wants him to stay longer.

“Really, James we didn’t talk about a contract in this moment – we are more than happy he is here and he is happy to be here. So we are happy he is happy; there is no problem to sign the contract."