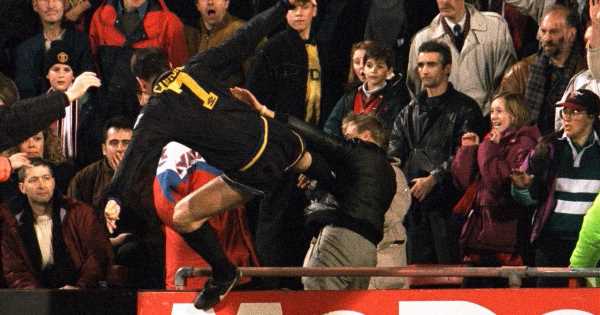 Eric Cantona has admitted he regrets not kicking Crystal Palace fan Matthew Simmons harder despite receiving a nine-month ban for his infamous moment of madness.

The former Manchester United forward was sent off in a Premier League clash between the sides at Selhurst Park in 1995, after a tussle with defender Richard Shaw.

He then launched a kung-fu style kick at Simmons, who had been abusing him from behind the advertising hoardings as Cantona walked down the touchline towards the tunnel.

Cantona was hit with the lengthy ban by the Football Association, stripped of the France captaincy and also handed a two-week prison sentence, which was later reduced to 120 hours community service for the attack.

But he insists his only regret from the whole episode was not making a better connection with Simmons, who he claimed had been racially abusing him.

"I have been insulted thousands of times and have never reacted, but sometimes you are fragile," Cantona said in The United Way – a new film which he has narrated and co-written.

"I have one regret," he added. "I would have loved to have kicked him even harder. I was banned for nine months. They wanted me to be an example."

Palace fan Simmons had his season ticket revoked by the club, while Cantona was forced to sit out the rest of the 94/95 season, as United surrendered the title to Blackburn.

The FA had thrown the book at United's talisman, banning him from any football related activity including reserve matches.

And he almost never played for United again, after he was caught out for featuring in a friendly match organised behind closed doors.

"It was just a friendly game, but the journalist was on top of a tree outside and he took a picture," said Cantona.

"Unfortunately he didn't fall. The next day it was in the paper and the FA wanted to ban me even more.

"The manager [Sir Alex Ferguson] found the right words like always. And I loved him and respected him. Like a father."

Cantona stayed at United for a further two seasons, winning two more league titles as well as scoring the winner in the 1996 FA Cup final, but shocked the world of football when he announced his retirement at the age of 30 at the end of the following season.