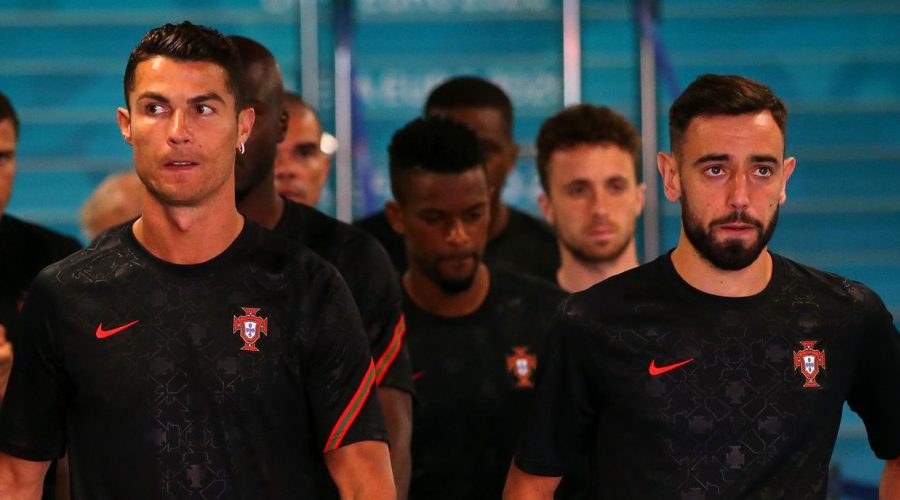 Bruno Fernandes has played down the idea of international team-mate Cristiano Ronaldo being their side’s “most valuable player”.

The Manchester United midfielder was part of the starting XI for the European champions that secured an opening 3-0 win against Hungary.

And the headlines were stole by the five-time Ballon d’Or winner as he scored a brace in the last five minutes to secure the Euro 2020 points.

It saw the 36-year-old, who used to play at Old Trafford, earn plaudits from fans and pundits as he became the all-time top scorer in the tournament’s history.

But Fernandes believes that the holders should not be labelled a one-man team following Ronaldo’s exploits.

Speaking to United’s website, the Portuguese star said: “Ronaldo is influential, as always.

“He is another one who wants to do his best and is making a difference. The most valuable player in the national team is the 'we'.

“The 'we' is the most important, there are many Is, but the 'us' is what counts.”

Fernandes went into the Euros as one of the most in-form players, having scored 28 goals and made 17 assists in his first full season for the Red Devils.

Do you think Cristiano Ronaldo and Bruno Fernandes will lift the Euro 2020 trophy? Let us know in the comments section.

Some of his strikes came from set pieces – but it was the Juventus forward that lined up for them in pre-tournament friendlies.

The 26-year-old, though, is not concerned as he added: “I already did take one [free-kick]. I’m already doing it, but it’s not necessarily my focus here.

“We have many players who can take them in their clubs and here. It’s not important who takes it.

“The only important thing here is to help the team whatever way I can do that and, if I can help them with the goals inside or outside of the penalty box, I will be happy.

“Our goal is to help the national team to win and I’m no exception.”

Fernandes will next be in action for Portugal when they take on Germany on June 19 in a big to secure a place in the knockout stages.