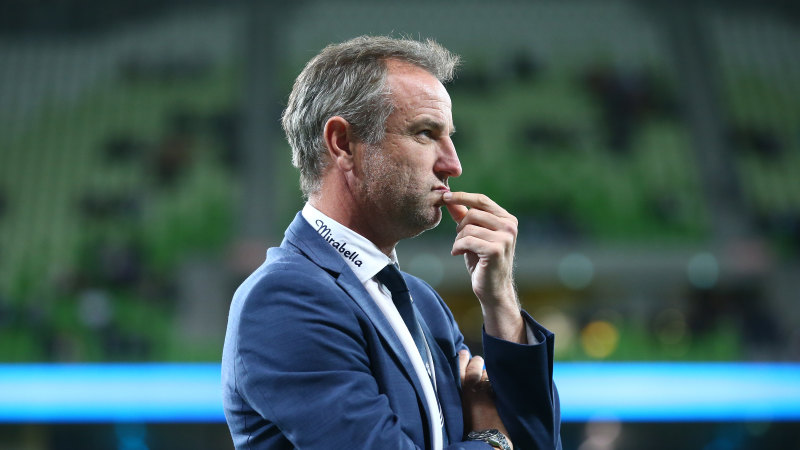 Melbourne Victory and rookie coach Grant Brebner have parted company after the club’s latest humiliation, a record 7-0 rout at the hands of cross-town rivals Melbourne City.

Victory chairman and major shareholder Anthony Di Pietro and Brebner, who has been in charge since last June, fronted a delayed press conference about an hour after the final whistle following the club’s heaviest-ever defeat at AAMI Park on Saturday night to announce the move. 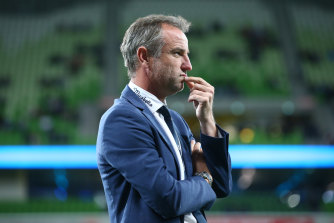 Di Pietro said a full review into the debacle that has been this season is continuing, and while Victory will look to appoint a new full-time coach it is highly likely that an interim arrangement will be put in place until the end of this campaign.

Di Pietro said the decision to change coaches was made at an emotional impromptu board meeting, at which Brebner spoke, following the game. He did not say whether the coach had resigned or been sacked, but suggested it had been a mutual understanding that a change had to be made.

“Grant and myself and the CEO [Trent Jacobs] and some board members have met and have come to the agreement that Grant will no longer be the coach of Melbourne Victory and that it is in the best interests of everyone involved, the club and Grant as a person,” he said.

“He has worked relentlessly, things haven’t worked out for a multitude of reasons. At some point Grant’s words [in the meeting] were we have to think about what’s best for the club going forward. You can speculate about resignation, mutual parting of the ways, termination.”

Brebner said he had been grateful to be given the chance to helm such a big club, despite his inexperience. “Sadly my expectations and the club’s expectations are a lot higher than where we sit [but] this club will come back bigger and better than ever,” he said.

He leaves with an overall win-loss record of four wins from 22 games across this season and last.

Earlier golden boot winner Jamie Maclaren was the five-goal hero as City leapt to the top of the A-League table with the demolition of Victory, who were reduced to 10 men for more than an hour following the dismissal of captain Adama Traore for a first-half foul on Andrew Nabbout. 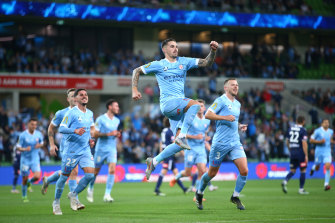 Jamie Maclaren was on top of his game for Melbourne City on Saturday night, scoring five goals in their thrashing of Melbourne Victory.Credit:Getty Images

It was the second time in a matter of weeks that Victory have been destroyed by a rampant City, having lost 6-0 when they first met in early March.

The former A-League giants now look like a rabble and it is hard to see them recovering any time soon.

Maclaren will rightly grab the plaudits and his ruthlessness demonstrated why he is the competition’s No. 1 marksman. But early in the game his teammate Nabbout was the central figure as he opened the scoring with an amazing 11th-minute goal and was then crunched by Traore just before the half-hour mark in an incident for which the Victory defender could well face stiff consequences.

The Ivorian was shown a straight red card by referee Chris Beath for his challenge from behind, butremonstrated at Beath. 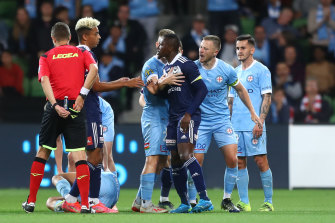 Victory’s Adama Traore is held back by a City player after receiving his red card.Credit:Getty Images

As the referee reached into his back pocket, Traore put his hand out to try and stop Beath brandishing the red card. His ill-judged attempt to persuade Beath to change his mind sparked a brief melee before a fuming Traore removed the armband and stormed off.

Nabbout’s influence on the first half became even more pronounced after his goal and the send-off when he won a penalty shortly after Traore’s dismissal, Jacob Butterfield, who had been shifted to left back in Traore’s absence, bringing him down as he drove into the penalty area.

Maclaren stepped forward to give Acton no chance from the spot, notching his 43rd City goal.

City simply ran riot in the second half, Maclaren heading home Marco Tilio’s cross and then converting a second penalty to make it 4-0. 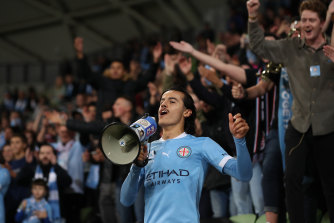 City’s Stefan Colakovski has plenty to shout about after the big win.Credit:Getty Images

He then scored two more and Adrian Luna completed the humiliation.

Meanwhile, Western United paved the way for City to go to the top of the table earlier on Saturday when they beat Central Coast 1-0 in Tasmania, Connor Pain’s early goal enough to separate the teams. City now have 31 points, one more than the Mariners, and have a game in hand.

April 17, 2021 Soccer Comments Off on Brebner out after Victory’s 7-0 humiliation against Melbourne City
NFL News