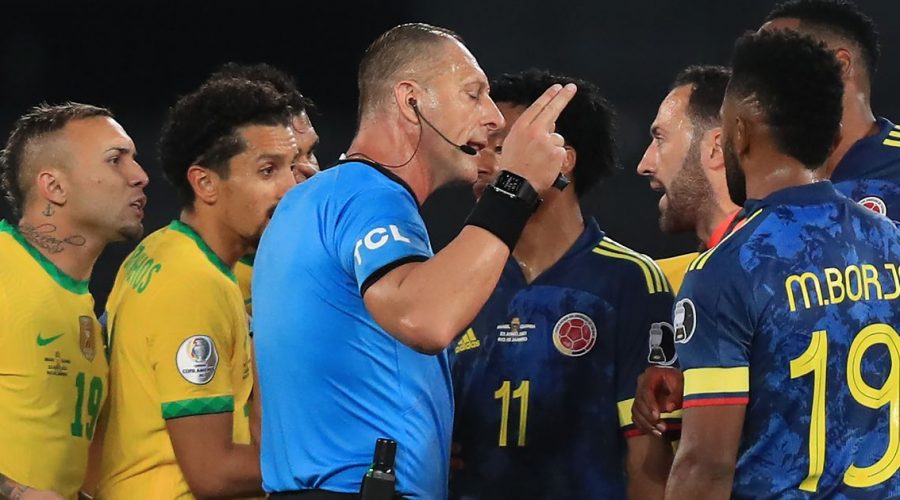 Brazil sealed their place in the Copa America quarter-finals on Wednesday night in controversial fashion – with a referee from Argentina helping them get there.

Tite's men were taking on Colombia in their final Group B outing at Rio de Janeiro's Olympic Stadium, needing just a point to ensure they finished top.

But they got off to a nightmare start, falling a goal behind when Colombia's Luis Diaz powered home a sensational bicycle kick from inside the box after 10 minutes.

The Selecao struggled throughout the game and appeared to be heading for a defeat before controversy ensued with 12 minutes remaining.

They got their equaliser thanks to an accidental touch from experienced referee Nestor Pitana, who blocked a pass from Neymar just outside the Colombia penalty area which appeared to be heading towards one of their players.

Instead, the ball rebounded off Pitana and back to Brazil substitute Lucas Paqueta, who found Renan Lodi out on the left flank.

Who do you think will win the Copa America this summer? Let us know in the comments section below.

Lodi then whipped in an inch-perfect cross for Roberto Firmino to head home, with David Ospina failing to prevent it from finding the back of the net.

Colombia players were left seething with Pitana for not bringing the game to a halt when the ball struck him, surrounding the referee in fury at his decision.

However, he stood firm and refused to disallow the equaliser, which gave Brazil the platform to go on and take all three points in the dying seconds.

Mainly because of Colombia's protests, 10 minutes of stoppage time were added on at the end of the game – and Brazil snatched victory in the very last of them.

Neymar whipped in a corner and found an unmarked Casemiro, who headed past Ospina to secure the Selecao progression to the last eight in highly contentious circumstances.

They have wrapped up top spot in Group B and will now land a favourable draw in the quarter-finals, while Colombia will have to wait to discover their fate in the tournament.