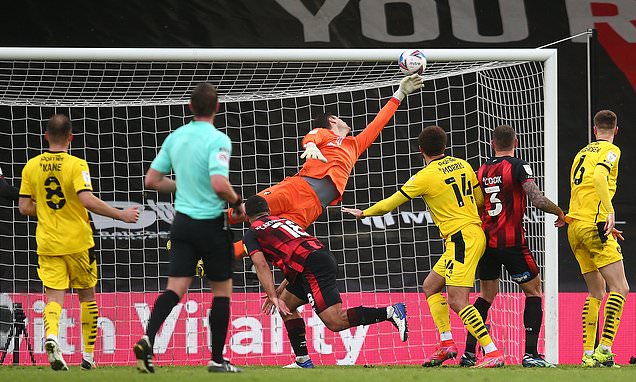 Bournemouth 2-3 Barnsley: Jonathan Woodgate’s side lose costly ground to the Tykes in close battle for the Championship play-off positions

Battling Barnsley really are proving themselves the disruptors of the Championship’s cosy upper echelons.

It’s 11 league games unbeaten now for the South Yorkshire side and this win affords them the luxury of a five-point cushion between themselves in sixth and Bournemouth in seventh.

We all expected Norwich, Watford, Swansea and Brentford to be challenging for promotion to the Premier League right now. Reading less so. Barnsley? No chance. 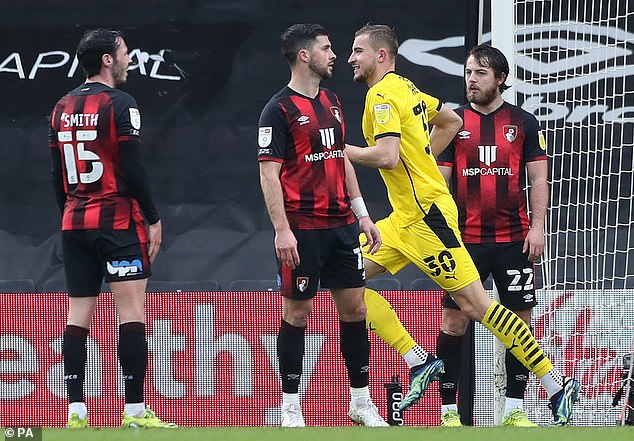 Yet here they are. Indomitable, indefatigable, unorthodox but sublimely effective, they roared back from 2-1 down to record what is undoubtedly the most significant result of the run that has propelled them up the league.

Could the Tykes grace the Premier League for the first time since 1997-98, just a second top-flight campaign in their entire history? Well, after a headed winner from Carlton Morris 10 minutes from time here, it could yet be so.

Morris rose highest in a crowded penalty area to meet Alex Mowatt’s free-kick from the left side and head into the top corner with perfect placement.

To think that Barnsley’s players had moments earlier been complaining about where referee John Brooks had placed his white spray. It didn’t prove important.

The result could do, though, after an absorbing contest that saw Barnsley go ahead through Michal Helik only for Arnaut Danjuma to equalise five minutes later. 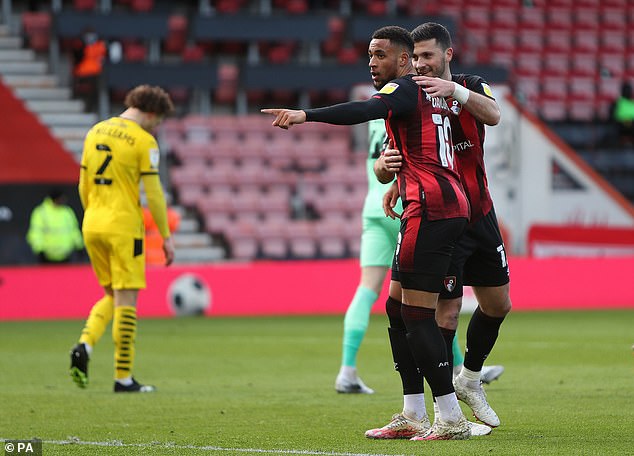 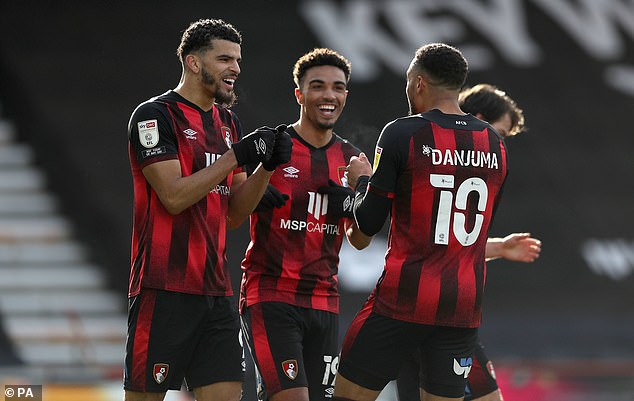 Bournemouth then went in front through Dominic Solanke just before half-time, only for Dominik Frieser to make it 2-2 on the hour.

At that point, the game could easily have swung either way. But it was Barnsley, brimming as they are with confidence at the moment, who bent proceedings their way. Who knows what wonder now lies in store for them.

A heavy Spring shower right on kick-off seemed to slow down the playing surface and aided Barnsley’s pressing policy in the opening stages.

They succeeded in forcing a few misplaced Bournemouth passes but their 16th-minute breakthrough came from a set-piece off the training ground.

Jordan Williams surged down the left to win the corner, which Mowatt whipped to the near post and Mads Andersen, stooping in, flicked backwards. 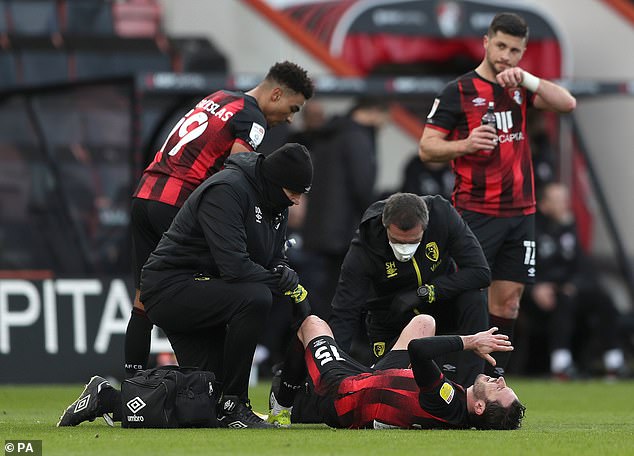 Bournemouth’s defenders seemed to be drawn forwards in pursuit of the ball, offering Helik a pocket of space at the back post to smash home the flick-on for his fifth goal of the season.

It sparked Jonathan Woodgate’s side into life and their equaliser, just five minutes after falling behind, was an excellent breakaway goal.

Keeper Asmir Begovic came out with command to claim a Barnsley cross from the right and almost in the same motion hurled the ball a good 30 yards towards Junior Stanislas near halfway on the right.

Williams seemed to read the danger and came across with purpose to cut the ball out. For whatever reason, the Barnsley left wing-back missed it completely and Stanislas was away.

He stepped inside Conor Chaplin and could have tried the curling shot himself from the edge of the box. Instead, he unselfishly rolled a pass into Danjuma, unmarked, to tuck home. 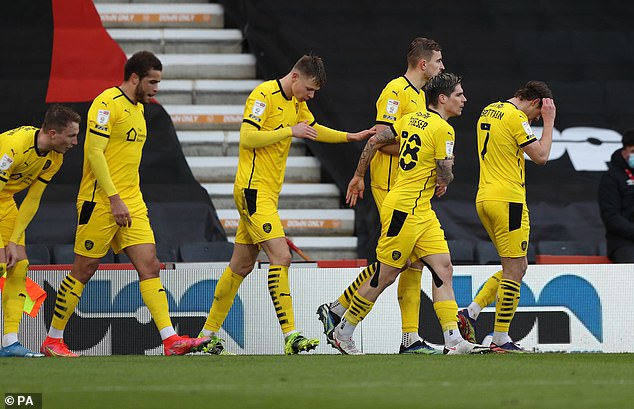 From there, Bournemouth had Barnsley under the cosh. Danjuma again moved them forwards down the left and the ball fell invitingly for Stanislas to strike on the volley.

It was sweetly hit but keeper Brad Collins managed to get a fingertip touch onto the crossbar and to safety. A few minutes later, Barnsley striker Cauley Woodrow, of all people, blocked a goalbound Jefferson Lerma effort.

The goal was coming, however, and arrived in first-half stoppage time. Again, Danjuma was afforded time and space on the left, delivering a low cross through a corridor of uncertainty on the edge of the Barnsley six-yard box.

There was Solanke at the back post, slipping the ball across Collins and in while slipping over on the wet surface. Delight for Bournemouth but bitter and sweary recriminations among the Barnsley ranks.

The Tykes had work to do and Valerien Ismael went early with his usual trick of the triple substitution, with Callum Styles, Carlton Morris and Herbie Kane all introduced at half-time. 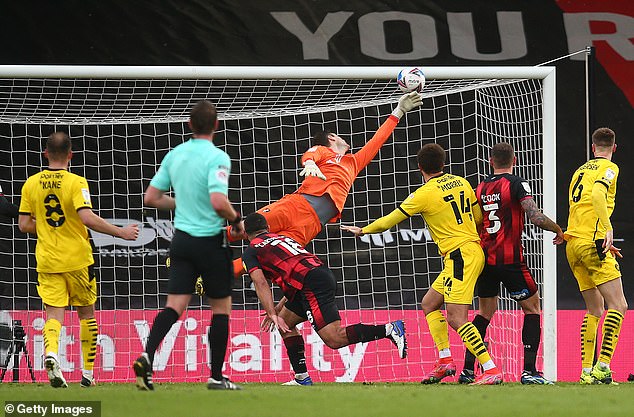 They pieced together a slick passing move early in the second-half with Kane forcing a save from Begovic from 30 yards.

But keeper Collins almost gifted Bournemouth a third when he came out to clear a ball over the top, miskicked completely and Solanke went round him but the angle was tight and Solanke couldn’t muster enough power, letting Barnsley off the hook.

It would prove costly for the hosts as Barnsley levelled on the hour mark. Cauley Woodrow advanced down the right and cut a low cross back that took a deflection off a Bournemouth defender and fell into the path of Frieser to finish.

At 2-2, the contest hung tantalisingly in the balance and both sides had further openings. Collins again failed to connect with the ball as Sam Surridge chased down a ball over the top and again he got away with it.

At the other end, a Kane free-kick forced Begovic into a save to turn the ball around the post before substitute Daryl Dike’s attempted flick finish didn’t quite come off.

But his fellow substitute Morris was unerring with the header that won it and Bournemouth couldn’t muster a reply.