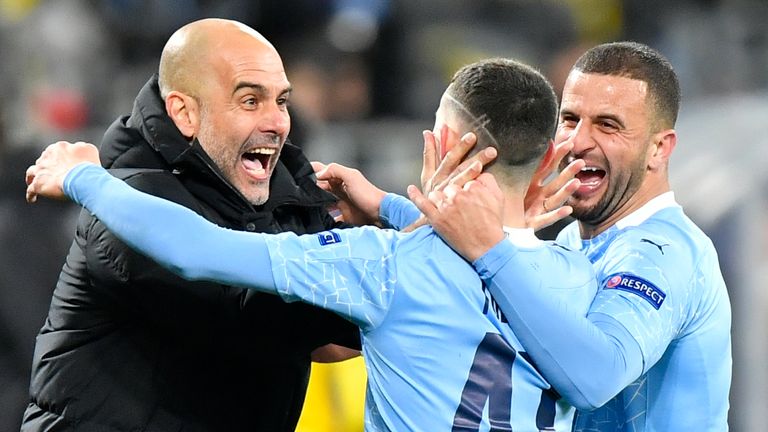 Match report as Jude Bellingham became the youngest English goalscorer in the Champions League when opening the scoring to put Borussia Dortmund ahead in the quarter-final tie; Riyad Mahrez and Phil Foden reply to send Pep Guardiola’s Manchester City side through Manchester City reached the semi-finals of the Champions League for the first time under Pep Guardiola after beating Borussia Dortmund 2-1 in Germany, winning the tie 4-2 on aggregate.

Holding a 2-1 advantage from the first leg, City did not know whether to stick or twist in the early stages and were caught cold by a fantastic strike from 17-year-old Jude Bellingham, who became the youngest English goalscorer in the Champions League.

Guardiola has seen his City team knocked out at the quarter-final stage in the last three seasons and must have been fearing the worst again, but Emre Can handed the visitors a lifeline when handling a cross. Riyad Mahrez stroked home from the penalty spot (55) before Phil Foden hammered in a second (75) from the edge of the area to rubberstamp the victory.

City, whose quest for an unprecedented quadruple lives on, will now face Paris Saint-Germain in the last four.

Manchester City face another key marker on their road to the quadruple as they face Chelsea in an FA Cup semi-final at Wembley on Saturday, 5.30pm kick off.

Dortmund are seven points off the pace in the race for the top four in Germany and play Werder Bremen on Saturday, 12.30pm kick off.