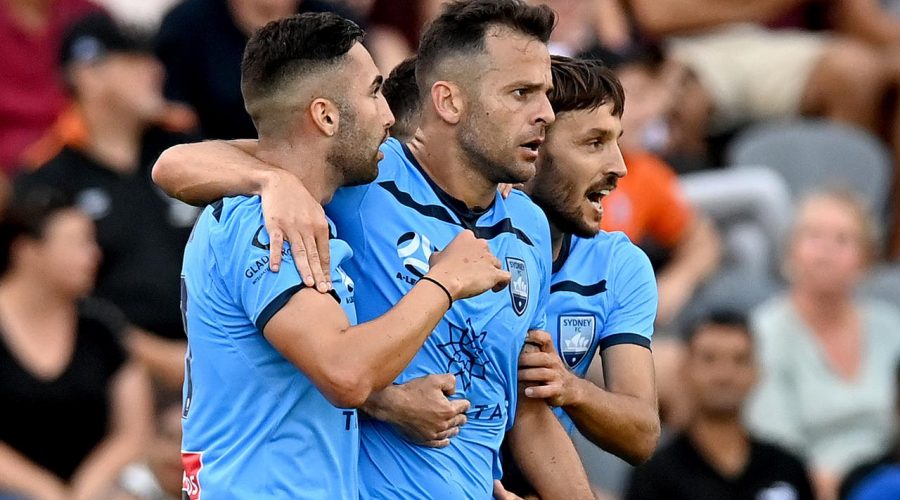 Bobo’s first A-League goal in almost three years secured a deserved point for Sydney FC, but their 1-1 draw with Brisbane Roar on Saturday did little to ease the concern of a disappointing run of form for both teams.

With the Roar leading 1-0 at Dolphin Stadium and Sydney staring at a third straight A-League defeat for the first time since 2013, substitute Bobo rose to the occasion to head home a 71st-minute Joel King cross.

Having returned to the club in January after leaving the Sky Blues at the end of the 2017-18 season, Bobo’s goal was his first for Sydney since April 2018.

However, it was Sydney’s only moment of joy, with champions now without a win in their past four matches.

It’s a run the Roar – who needed the help of a howler from Sydney goalkeeper Andrew Redmayne to score through Dylan Wenzel-Halls – can relate to, with Brisbane not having tasted victory in their past five games after a run of four successive wins.

“My job as a coach is to try to improve the performance of the team so we can create chances and hopefully when we do take them, win football games,” Roar coach Warren Moon said.

“If it comes to a point where we keep missing those chances, and I’ve got to look at other options in the final third (of the park), that’s my job as well.”

[email protected] FT: @OFICIALBob13's first goal back in Sky Blue isn't enough as the points are shared in Queensland. #SydneyIsSkyBlue#Premi4rs#Champion5#BRIvSYDpic.twitter.com/xHcCakESMj

Moon denied that his club were yet to beat a “big team” this season, despite three of their four wins this season coming against sides currently outside the top six, including two against cellar dwellers Melbourne Victory.

“I look at it every week and there’s no easy game,” he said.

Sydney coach Steve Corica was pleased with Bobo returning to his goalscoring ways, but admitted the Sky Blues were having a “bad run”.

“This is a period we’ll get through,” Corica said.

“A couple of strikers aren’t taking them at the moment, and sometimes that’s the way it goes.”

They include Kosta Barbarouses, who missed a first-half sitter on Saturday before being replaced at half-time.

Corica admitted it was a shocking goal Sydney conceded when Redmayne, a keeper with Socceroos experience, let a long-distance Wenzel-Halls shot directed straight at him slip through his fingers.

“It was a terrible mistake and it put us on the back foot but I think we recovered quite well from it,” he said.

The goal was Wenzel-Halls sixth of the season and his first in a month.

“Obviously sometimes you get a little bit of luck, (but) if you don’t shoot, you don’t score,” the Brisbane striker told Fox Sports.