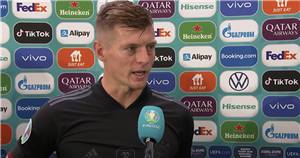 Bitter Germany star Toni Kroos claims that England had "almost no chances" before scoring their first goal in the Euro 2020 last-16 clash.

England knocked Germany out to reach the quarter-finals with a 2-0 win at Wembley on Tuesday evening.

The clash was a closely fought affair, with very few shots in the first half and much of the second.

However, England drew ahead thanks to Raheem Sterling's close-range finish with just 15 minutes left to play.

Thomas Muller then missed a golden chance to equalise, putting his effort wide from a one-on-one, before Harry Kane's header secured England's passage through to the next round.

Kane had squandered an earlier chance right at the end of the first half, but there were few other opportunities to write home about.

And speaking after the match, the beaten Kroos admitted that he felt the result was harsh given the lack of chances England created before they finally pulled ahead.

"You can imagine how bitter this tastes," the Real Madrid midfielder told ARD. "It was a balanced match until they scored the first goal.

"Both teams cancelled each other out. The efficiency made the difference today.

"England had almost no chances until they made it 1-0. Our performance was solid until then, but the goal changed everything."

Germany manager Joachim Low, whose 15-year spell at the helm came to an end in the defeat to England, insisted that he had no issues with the effort from his side, but admitted that something was "missing" this summer.

"The team threw everything into it. It showed a very good mentality and a great will for all the games," Low said.

"You could feel it, they wanted to achieve something. But something was missing in certain situations.

"It wasn't just the case yesterday, you could feel it after we played 60 or 70 good minutes against Portugal, then again in the game against Hungary."