El Clasico – Barcelona vs Real Madrid, LIVE: Latest score and updates as Julen Lopetegui fights to save his career at Nou Camp

Real Madrid boss Julen Lopetegui continues to fight to save his job as he prepares to get his first taste of the rivalry with Barcelona in the first El Clasico of the season.

Barcelona are without star man Lionel Messi after he broke his arm in a recent league game and it is the first time since 2007 that neither Messi or Cristiano Ronaldo have featured in the El Clasico matches.

It is one of the stand-out matches in world football so stick with Sportsmail’s NATHAN SALT throughout the afternoon to get all the updates from the Nou Camp.

8min: Barcelona have no plan to let Isco out of their sights this afternoon. The Spanish attacking midfielder is exceptional when given time to lift his head up and pick a pass and it is no surprise Ernesto Valverde wants his players to hound him. 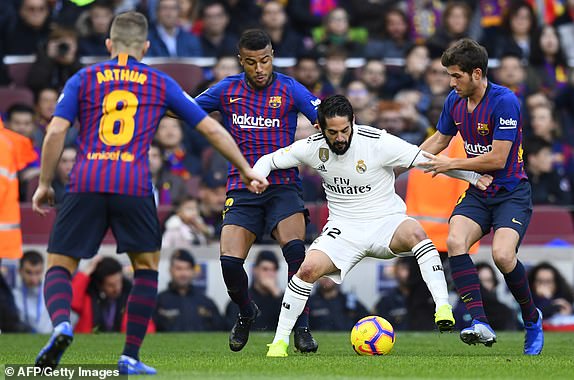 6min: Huge whistles from the home supporters as Sergio Ramos cynically brings down Arthur in midfield. Gets a talking to from the referee but avoids an early caution.

4min: Better chances falling to the hosts here. Philippe Coutinho burst down the left but his cross evaded everyone at the back post. Long afternoon for Madrid’s full-backs.

4min: Good start from Barcelona. Showing signs of their attacking intent already and it looks set to be a busy afternoon for Madrid’s full-backs.

Best chance came down Barcelona’s left as Philippe Coutinho burst clear but his deep cross evaded everyone. A let-off.

Moments away now. Cracking atmosphere here with a stunning mosaic dominating the crowd.

PETE JENSON AT THE NOU CAMP: A late doubt over the fitness of Real Madrid full-backs. Alvaro Odriozola was warming up with first team until he finally rejoined substitutes. Still not clear if it was Nacho or Marcelo who felt recent injuries while warming up.

Barcelona cruised to the title last season and were mightily close to going invincible bar a late defeat.

For Madrid, a blunt attack and a leaky rear-guard has seen them slip to a poor start and should they lose this afternoon, the gap between the two sides would stretch to seven points. 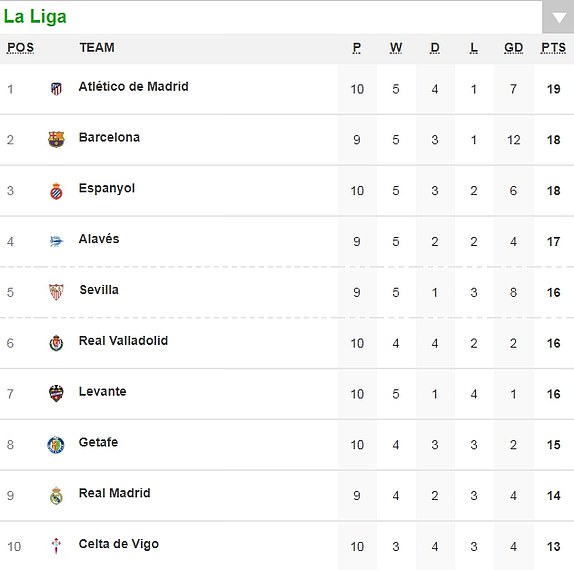 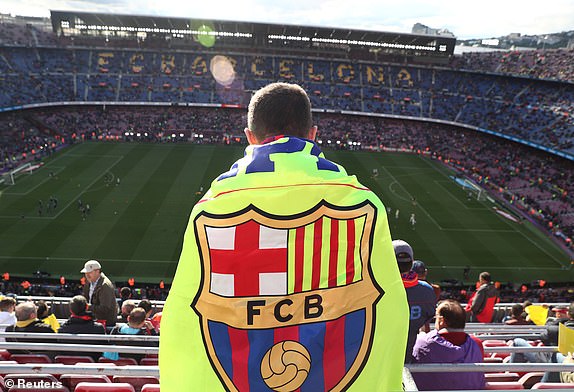 Sat ninth, Madrid desperately need a win here today. For Barcelona, a win can send them back to the top of the pile above Diego Simeone’s Atletico Madrid.

Lots on the line for both sides. 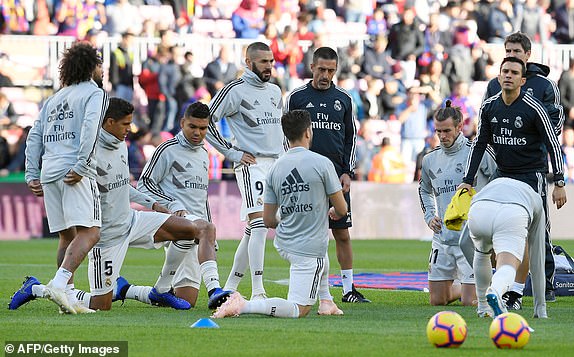 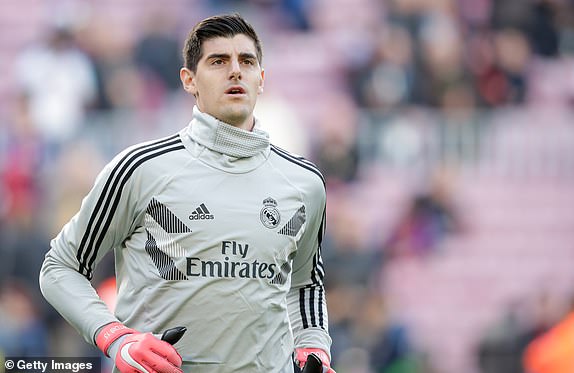 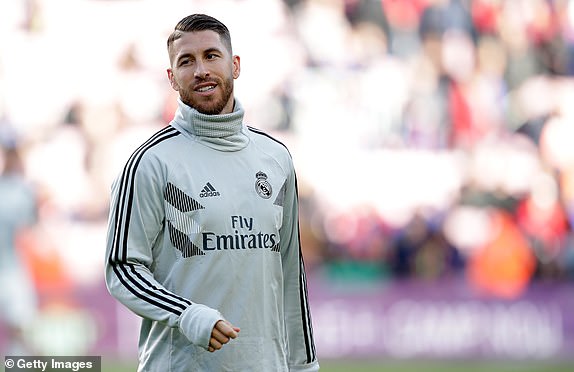 For the first time since 2007, neither Lionel Messi nor Cristiano Ronaldo will feature in the Clasico.

The pair have become synonymous with the biggest showdown in Spanish football but with Ronaldo now at Juve and Messi out injured, the stage is set for someone else to become the hero of the occasion.

Madrid look short without Ronaldo’s phenomenal goal return season after season. Neymar, Eden Hazard and Kylian Mbappe have all been mentioned in the conversation to replace him but nobody came through the door in the summer. 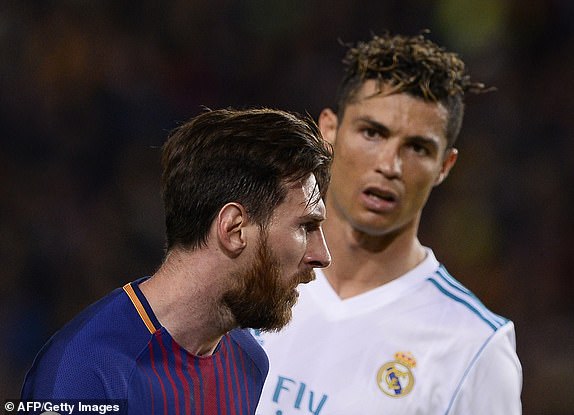 45 years ago today, Johan Cruyff made his league debut with FC Barcelona, scoring two goals in a 4-0 victory. Can @FCBarcelona do the same today? #CruyffLegacy pic.twitter.com/HfhmgPV5LZ

Sportsmail’s PETE JENSON provides the pre-match view from Spain: Julen Lopetegui’s dad has been sticking up for his lad in the build-up to the game.

‘They have stolen 50 goals from him,’ he told El Mundo in reference to the sale of Cristiano Ronaldo and the failure to buy a replacement.

‘Cristiano [Ronaldo] scored 50 goals and they miss him,’ he said. ‘They have brought in no one. There was talk of Neymar, of this one or that one, but no one came, he has had to make do.’ 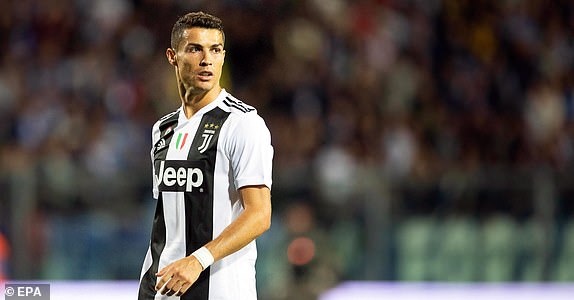 They may be sat ninth in the La Liga table and manager Julen Lopetegui is under immense pressure with talk of the sack refusing to dissipate, but Madrid’s star players looked relaxed ahead of kick-off.

They were pictured in club tracksuits and the players showed no signs they are set to buckle against their fiercest rivals. 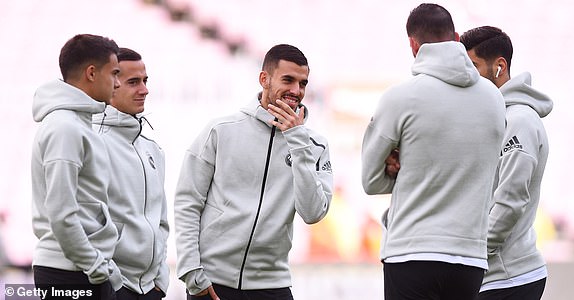 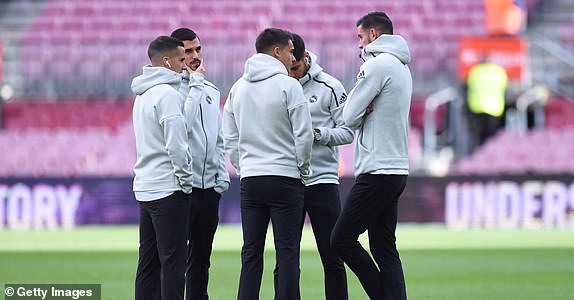 ‘I don’t think I am going to die’: Julen Lopetegui is looking to the future with Real Madrid despite claims he is at risk of being sacked

Julen Lopetegui heads into his first Clasico against fierce rivals Barcelona saying he still believes he can succeed as Real Madrid coach.

Speculation of his imminent sacking has been rampant in Spain since Madrid went on a five-game winless streak that included their longest ever scoring drought.

An unconvincing 2-1 win over Viktoria Plzen this week did little to change the mood that Lopetegui is in serious danger of losing his job.

The players are arriving at the stadium! ?

With Cristiano Ronaldo no longer Madrid’s man for the big occasion, Lopetegui is looking to both Gareth Bale and Karim Benzema to provide the spark up top.

Thibaut Courtois is likely to be busy and the midfield battle between Kroos/Modric and Busquets/Rakitic is always fascinating. 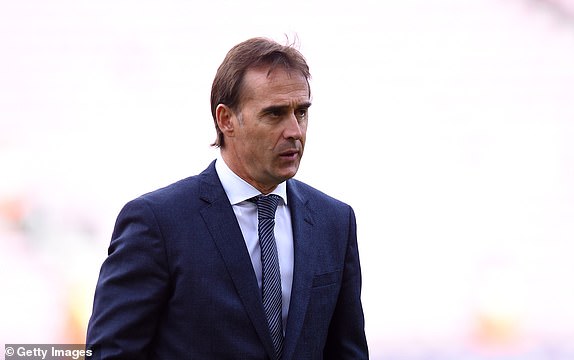 Star man Lionel Messi is in the building but having broken his arm, he will not play any part for at least the next few weeks.

The pressure will fall at the feet of striker Luis Suarez and the Spanish press have already suggested the result could hinge on the performances of both sides’ No 9s.

Good afternoon and welcome to Sportsmail’s coverage of El Clasico as Real Madrid make the trip to rivals Barcelona.

Madrid boss Julen Lopetegui continues to fight to save his job and a statement win at the Nou Camp would go some way to winning over his critics.

Stick with me throughout the afternoon for all the updates. Kick-off is at 3:15pm. 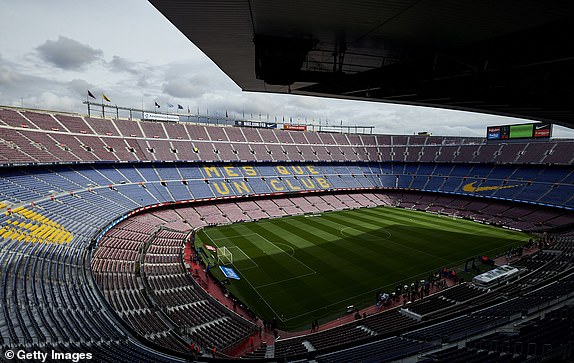