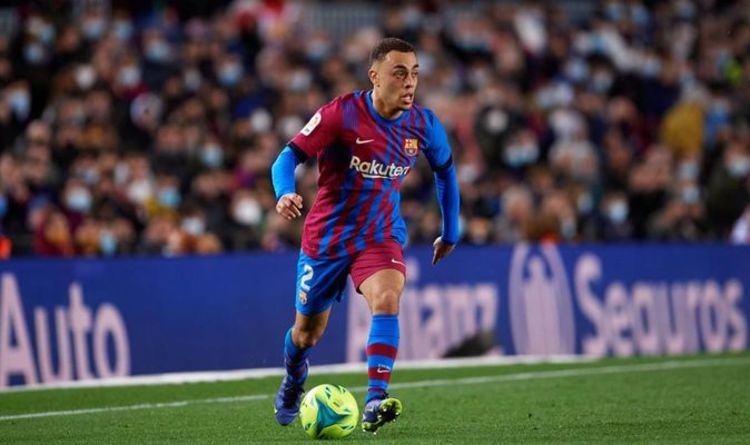 Barcelona are set to meet with Sergino Dest and his representatives to discuss their transfer plans with Chelsea waiting in the wings. Thomas Tuchel wants to bring in the United States international to cover the injuries to Ben Chilwell and Reece James.

Chelsea are set to learn whether or not a transfer for Barcelona star Dest will be possible this month.

The Blues have made the defender one of their top targets in the January transfer window as Tuchel looks to up the numbers of his squad.

Covid and injuries have laid his squad bare with Marcos Alonso the only fit full-back with Chilwell and James missing.

Both players are key components of Chelsea’s wing-back system while Chilwell will not play again this season.

As a result, the transfer window has given Tuchel a means to solve his problem any several options have popped up.

One of them includes signing Dest from Barcelona, who are keen to sell players to balance their books.

Despite forking out £55m on Ferran Torres, they cannot register the ex-Manchester City star until they empty their wage bill due to La Liga rules.

That means that some players could leave the Nou Camp this month while Chelsea are looking to take advantage and make enquiries about Dest.

According to today’s edition of the Sunday Mirror, Barca are set to meet with the United States international with the club split over whether or not to sell after being valued at £17m.

Dest would rather stay at Barcelona but if an opening presents itself, he is open to moving to Chelsea.

The former Ajax star can operate on either flank, making him a desirable addition at Stamford Bridge where both sides will have to be covered after the injuries to Chilwell and James.

Another option Tuchel is looking at is recalling Emerson Palmieri from his loan at Lyon but that has proved difficult.

The German coach is a big fan of the Italian but could not promise him first-team football, thus allowing him to leave on a temporary basis.

But to recall the left-back, that would require Lyon agreeing to do so – and so far they have been reluctant to agree.

Other options include calling Ian Maatsen back from Coventry while a loan for Lucas Digne has not been ruled out either after his problems at Everton.