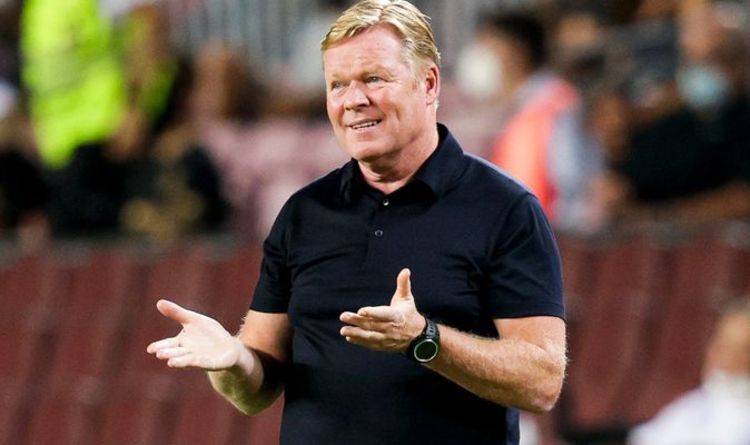 Barcelona are alleged to be ‘furious’ with their French defender Samuel Umtiti over his attitude and are threatening to terminate his contract. The 27-year-old centre-back has been at the Nou Camp for five years but has struggled for first-team action of late, and only managed 13 La Liga appearances last season.

The Catalan giant’s perilous financial situation has been well-documented, and they are desperately trying to move on some of their less important players in order to cut costs.

Umtiti, whose £212,000-per-week contract expires in 2023, is one of those who is deemed to be disposable, with Barca reportedly desperately searching for a buyer.

But according to Spanish outlet Diario Sport the situation with him has grown so bad that the club are considering unilaterally terminating his current deal if they are unable to sell him.

The publication claim that Umtiti has turned down a number of opportunities to leave, and appears more than happy to see out the next two years of his contract against the club’s wishes.

This has infuriated Barca, who are believed to be ‘very angry’ with the way Umtiti has gone about things.

It is also alleged that they had a pact ahead of the summer that if Umtiti applied himself well in pre-season training and improved his performances he may have been given another opportunity.

This does not seem to have happened, however, and thus Barca are ready to cut their losses.

If they do choose to terminate his contract, however, they could face legal action from Umtiti’s team, which is the last thing they need given their already chaotic summer.

This would not be the first time Barca have chosen to take such a strong course of action.

And in an interview with Globoesporte he spoke of his disappointment with the way Barca dealt with his situation.

“I didn’t know, and when they told me I couldn’t believe it,” he said.

“I was at home, I was going out with my wife and I received a message from the club asking if I had the same email address. I confirmed and then received it.

“I didn’t understand it, I sent it to my manager and lawyer. They said it was my dismissal. Time passed and my name came out in the press. No conversation, nothing, they didn’t even call to say hello and goodbye.

“I always had the dream as a child to play for Barcelona. When I got there, they didn’t treat me as a footballer. I told the director that he didn’t treat me like a professional Barcelona player.”

It remains to be seen if any team comes in for Umtiti, but the likes of Manchester City and Arsenal have been linked in the past.

And it would be intriguing to see how the two-time La Liga winner would get on in the Premier League.