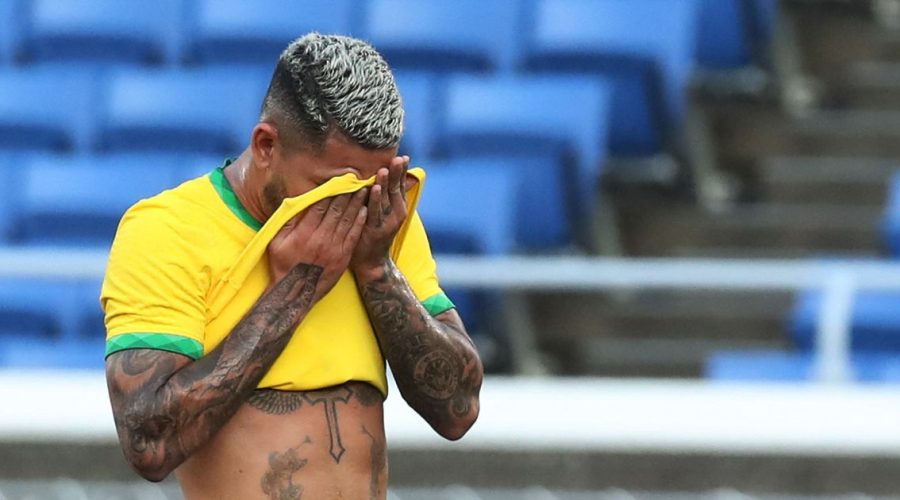 Aston Villa's Douglas Luiz was sent for Brazil in their Tokyo 2020 Olympic clash with Ivory Coast, in a decision that has been branded as one of VARs worst of all time.

Brazil are currently top of Group D, level on points with Ivory Coast, who held them to a draw on Sunday evening, however, the defending champions had to play 77 minutes with ten men.

Douglas Luiz initially saw yellow, but after consulting with VAR, the decision was overturned, and the Villa midfielder saw red.

And some furious fans are calling it the worst VAR decision of all time.

"That Douglas Luiz red card at the Olympics is without a doubt the worst VAR call I've ever, ever seen. Absolutely unbelievable," one fan tweeted after seeing the incident.

Another added: "Even worse how VAR overturned the original yellow card for a straight red."

"Douglas Luiz's red card is a joke. Did he even contact him? VAR is meant to right the ref's errors, not improve them…smh," a third tweeted, clearly annoyed by the decision.

A fourth added: "Douglas Luiz is sent off for Brazil. No way it's a red card btw. Very harsh indeed."

Is this the worst VAR call of all time? Let us know in the comments section

Luiz was deemed to have impeded former Leeds United winger Max Gradel, who was through on goal.

However, the replays showed minimal contact as Luiz held his hands up to signify no touch as Gradel took a second to tumble to the ground.

The former Manchester City midfielder then helped the fallen winger back up to his feet as any chance of bad blood between the pair quickly disappeared.

July 25, 2021 Soccer Comments Off on Aston Villa’s Luiz sent off for Brazil at Olympics with ‘worst VAR call ever’
NFL News