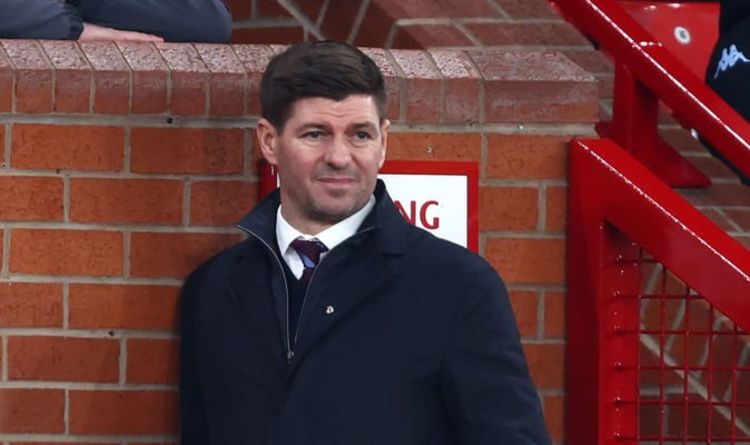 Aston Villa boss Steven Gerrard returned to Old Trafford for the first time in nearly seven years on Monday night as his side were defeated by Manchester United in the FA Cup. And the former England midfielder has taken a dig at the Red Devils by insisting the welcome he received was ‘relatively quiet’.

Gerrard was met with a deluge of boos as he made his way out of the tunnel and into the dugout ahead of the match. But he says the noise didn’t faze him at all.

“Relatively quiet,” Gerrard told the BBC when asked about his welcome. “I have been to noisier stadiums than this.”

“It was a good cup tie – a good atmosphere. But in terms of what I got, water off a duck’s back.”

Villa had two goals ruled out during the third-round encounter as United battled to a hard-fought victory, courtesy of Scott McTominay’s early header.

The Scotland international rose to nod home Fred’s delicious cross after eight minutes as the Red Devils got off to a dream start.

JUST IN: Steven Gerrard tipped to sign Philippe Coutinho a partner in crime

Ollie Watkins had a chance to equalise for the visitors but was unable to turn in Douglas Luiz’s corner after the United defence had failed to deal with it.

And Danny Ings was then inches away from getting on the end of a tantalising Emi Buendía cross.

Watkins was frustrated for a second time as he pounced on a Victor Lindelof mistake, before cutting inside the Sweden international and firing a shot at the crossbar.

And Jacob Ramsey then went close for the west Midlands side, before visiting keeper Emi Martinez tipped Luke Shaw’s thundering effort over the crossbar to cap an action-packed first half.

Villa were more than a match for their Premier League rivals and appeared to have drawn level in the early stages of the second period as Ings turned in Ezri Konsa’s header across goal.

But a lengthy VAR check ensued and referee Michael Oliver chalked the goal off after deciding that Edinson Cavani had been impeded in the build-up to the goal.

Watkins then had a goal disallowed after Ings had been caught offside, before Matty Cash saw an effort saved by David de Gea as United progressed to the fourth round.

“Very tough,” Gerrard admitted after the match. “We are out of the FA Cup and coming into this job I saw this competition as an opportunity to have a good run in it.

“The lads gave a lot in terms of performance but we need to learn and close the gap from a performance that was nearly good enough.

“We dominated for large parts but we were not ruthless enough.

“The officials took three-and-a-half minutes to settle that one [the disallowed Ings goal]. They have looked at two or three things in it.

“When VAR is there and they make a decision you have to accept it. There is nothing you can do to change it. The easy way out is to blame luck and the officials – we won’t do that.”