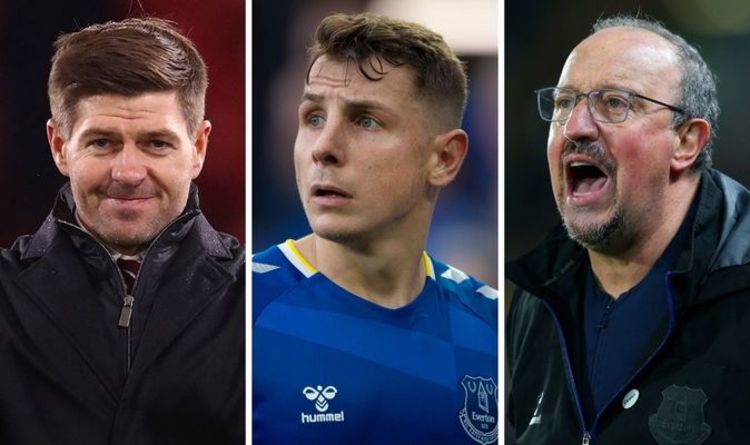 Aston Villa are in advanced negotiations with Everton over the signing of Lucas Digne but the two Premier League clubs are also discussing the prospect of Anwar El Ghazi heading the other way to Goodison Park, reports claim. Steven Gerrard’s side have moved to the front of the queue for the want-away Frenchman in recent days but the race for Digne’s services now appears to be nearing a conclusion.

The 28-year-old France international has fallen out of favour on Merseyside following a heated clash with manager Rafael Benitez.

Now, there does not appear to be any way back for Digne under Benitez’s management as his reps seek to find a solution as soon as possible.

There was talk earlier this week that Newcastle had lodged an opening offer of £22.5million for the player.

But now Villa are pressing ahead with a move and are prepared to leave all other potential suitors behind following their impressive loan coup of Philippe Coutinho.

According to Fabrizio Romano, talks are ongoing between both Villa and Everton to find an agreement.

“Aston Villa have been working for days to sign Lucas Digne. They’ve always been frontrunners – Chelsea out of the race,” Romano tweeted.

“Talks on, not 100% agreed yet between clubs. El Ghazi  also been discussed – nothing agreed on this point as Everton want cash. Next week will be key.”

El Ghazi was a former favourite of ex-boss Dean Smith but the attacker has barely featured since the appointment of Gerrard.

He is now keen to explore any move that will see him receive more game time.

Furthermore, El Ghazi can also take inspiration from the likes of Demarai Gray and Andros Townsend, who have both reignited their dwindling careers with the Toffees this season.

“It was very clear,” he said. “I want to ask a question to every fan or former player. What would Peter Reid say to a player who doesn’t want to be there? It is simple.

“I had a couple of conversations with him, he told me what he thought. So what do you expect a manager to do when a player is thinking about leaving?”

Benitez has already moved to sign Digne’s replacement in the form of Ukrainian international Vitaliy Mykolenko, who made his debut against The Tigers.

Villa are now looking to make another big statement with the signing of Digne.

Gerrard and the Villa board have also been tracking Ajax’s Nicolas Tagliafico and Bologna’s Scottish star Aaron Hickey.